The conspirators meet up to talk about the Billy Chambers issue and the stolen Cytron card. With Verna Thornton dead there's an open seat at the conspiracy table that Olivia Pope fills; when the new member arrives it shocks the other conspirators. In the Oval Office Governor Samuel Reston pays a visit to President Fitzgerald Grant throwing a shocking accusation at him and giving him an ultimatum.

Meanwhile the events of why Charlie let Billy live, how Billy and David Rosen teamed up all unfold.

Back at the office, as they grow closer to uncovering the mole's identity, Olivia Pope and her team of gladiators find themselves in an increasingly dangerous situation. The latest White House scandal pushes Cyrus over the edge. Someone close to Olivia is rushed to the hospital... who could it be?

Quinn's training with Huck takes a GIANT leap forward. Cyrus and James relationship is put the test. David Rosen manages to weasel his way back into the US Attorney's office.

All this and more with two shocking endings... leaving us hanging until September! And one more thing... the identity of the Mysterious Man is revealed? How is he tied to Olivia Pope?

Huck promised Olivia that he wouldn't kill Billy Chambers, so he hired someone else to do a job that was never fulfilled. Billy convinced Charlie that partnering with him would be in his best interest. He intends to use the Cytron card to prove election fraud. Unfortunately for him, David Rosen isn't handing it over just yet. In other news, the four living Defiance co-conspirators have a new member joining their group. It happens to be the same man for whom they rigged an election so he'd become President of the United States. Fitz doesn't want any more blood spilled. Olivia believes the best way to neutralize Billy is to get the Cytron card.

Olivia thinks Fitz should run with Mellie by his side. Waiting four more years will be difficult, but she can do it. Fitz can't. He wants her to be his First Lady. He tells her to come up with a plan to solve this little problem. He uses his seductive super power to assure her that they belong together. This inspires Olivia to spring into action. She realizes that Governor Reston is in cahoots with Billy Chambers. Quinn hacks into surveillance video that proves this to be true. She's getting good at this type of thing. Huck worries she's becoming a little too good and that she's becoming a little too much like him.

Jake's boss - the Mysterious Man - wants him to bring in Olivia Pope. He also wants Cyrus to show the president the sex tape he's sitting on. There can be no more delay. Cyrus has other problems when Olivia lets him know that Reston is the is aware of the election rigging. The governor is meeting with the president in the Oval Office. Cyrus rushes to intervene, but suffers a heart attack just outside the White House. Inside, Reston confronts his former opponent about the election rigging. Fitz denies any wrongdoing, but Reston doesn't buy it. He wants to be brought onboard as the vice president. That means Fitz will have to fire Sally Langston, who is already planning to run in the next primary.

Cyrus is being rushed to the hospital in an ambulance, but that doesn't stop him from calling Fitz and Olivia to find out what went down with Reston. James rushes to his husband's side. He breaks down in tears even though he's ticked about getting frozen out from exclusives. Cyrus throws him a bone. He confirms that the president is seeking spiritual guidance from his pastor regarding his marriage. In reality, Fitz lays out to Mellie exactly how she's on her way out of the White House. It's the plan that Olivia drew up where everyone comes up a winner. Well, everyone but Mellie. Even Cyrus is impressed by the brilliance of it all.

A woman who was seen with Jake's CIA boss breaks into Olivia's apartment. She aims her gun at her target. BANG! Jake shoots the woman dead before she can pull her trigger. He brings a traumatized Olivia back to her office. He explains that the woman who tried to kill her was part of B-613. Olivia knows that Jake is in danger because he disobeyed orders by saving her life. He really is one of the good guys. She kisses him goodbye and tells him to be safe. That won't be easy. Olivia lets Cyrus know that someone tried to kill her. She also lets him know that she and Fitz will be together. Cyrus doesn't think so. He tells her that Fitz killed Verna Thornton. He then shows Fitz the video of Olivia having sex with Jake.

Billy Chambers convinces David to finally turn over the Cytron card after a long speech about why he killed certain people and how his so-called friends (Olivia, Abby & the OPA team) ruined his life. The team tracks him down via his cell phone signal. Huck and Quinn lay in wait. They wrap him up in duct tape. Huck is all set to torture Billy to get the Cytron card, but he can't go through with it. Quinn can though. She takes a power drill to Billy's thigh. Blood sprays everywhere. Quinn doesn't seem to mind. In fact, she's almost enjoying it. She gets the info and the team finds the Cytron card. The only problem is that it's blank. David Rosen has the real card. Abby figures out that he's been playing them from the get-go.

David used the time he was living out of the office to attempt to crack Olivia's wall safe over and over and over. After many tries, he finally got what he needed. He then created multiple fake Cytron cards. That's the one he gave to Billy Chambers. The Defiance Five meet once again to figure out what to do about David Rosen. Actually, they don't need to do a thing. David turns over the Cytron card to Cyrus. Olivia returns to her office to find a package waiting for her. Inside is a recording that was taken from the wire David was wearing when Billy Chambers confessed to murder.

It seems David was playing "everyone" in a way that would greatly benefit himself and also his friends in the end. In return for his clever ways, he receives credit for uncovering Billy Chambers as the mole. The president announces his heroics to the world before making him the U.S. Attorney for the District of Columbia. And for her trouble, Olivia receives one more gift that was in the box containing Billy’s confession. It’s a white hat. She promptly puts it on. You could say she puts it back on.

Olivia pays a visit to Fitz in the Oval Office. They reveal what they now each other's secrets. Fitz was going to say he didn't care about Jake so they could start fresh. He's guessing the same can't be said about murder. Olivia says they all went too far. She wants Fitz to run with Mellie by his side. She can't leave her friends. They need her. She's their gladiator.

Fitz returns to a surprised and confused Mellie while Olivia seems to finally be back in control of her life. This is right up to the moment she steps outside her apartment building. That's where throngs of press people are waiting to ask if she had an affair with the president. She's hustled into the back of a limo where Jake's boss is waiting. Earlier he'd thrown Jake into the underground cell where Huck spent many days until the CIA broke him. Now he sits across from a confused Olivia, who incredibly addresses this mysterious, dangerous man as Dad.

~ Special Thanks to ABC.com for providing the recap for White Hat's Back On [1] ~

For a full list of cast/character credits in order as they appeared click here: White Hat's Back On Credits 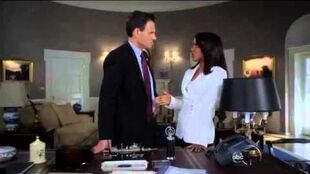 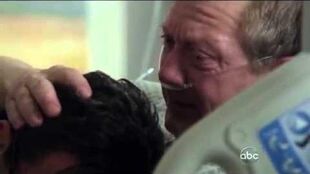 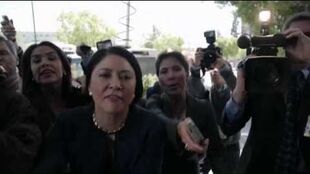 Scandal 2x22 White Hat's Back On

Retrieved from "https://scandal.fandom.com/wiki/White_Hat%27s_Back_On?oldid=69521"
Community content is available under CC-BY-SA unless otherwise noted.