"The Fish Rots from the Head"

Vanessa was chosen by Rowan to be the perfect political wife for Jake due to her wealth, connections, education, and upbringing. Jake courted her by faking to bump into her and resulting in her phone screen cracking. He then made it possible for them to run into her again to give her the impression that the second meeting was fate. Rowan chose her in order to build up Jake's recognition to be a viable choice for Vice President for Edison.

They got engaged quickly and Rowan organized a very public wedding with many powerful and wealthy guests for them. Shortly after they got married, Jake killed Vanessa's father by drugging his drink with a substance that caused the heart attack that ultimately led to his death which allowed Vanessa to be awarded her $5 billion inheritance. Rowan used Jake's access to Vanessa's wealth in order to fund a super PAC that was buying elections for Edison prior to Edison's public statement of disapproval for Hollis Doyle. This statement forced Edison to concede the election to Frankie Vargas.

Vanessa's marriage began to suffer once Olivia took Jake from Rowan to be the Vice President to Mellie Grant. Vanessa began to suspect that there's something more than just brother/sister thing going on between Jake and Olivia when Jake feels comfortable telling her nothing and everything to Olivia. When she asked him if he's cheating on her with Olivia, Jake told her he's not but Vanessa doesn't believe him since he's more closer to Olivia than to her.

Vanessa got into the car accident on the day she was supposed to do the interview on Sally Langston's "The Liberty Report" with Jake. Olivia went to the field and brought her into OPA to make sure there's no scandal about it. When Vanessa accused Olivia for ruining her relationship with Jake and sleeping with her husband, Olivia got angry and threw her into the wall and told her not to come for her. Olivia later brought her back home to Jake. Vanessa told Jake that the "car accident" she had wasn't an accident and she drove the car into the tree purposely because of her suffered marriage, the way Jake treats her and that she just "wanted to feel something". After the accident and everything, Vanessa got tired and told Jake that she can't do the marriage thing with him anymore since he doesn't or won't tell her anything about his past or present.

When Olivia knew about this, she brought Mellie in to talk Vanessa into doing the interview since Mellie and Vanessa shared the same kind of marriages. After she and Mellie had a talk, Vanessa got convinced and eventually did her interview, the interview which was important for the campaign at that time, with Jake on The Liberty Report. (They All Bow Down)

After Jake got promoted from NSA Director to the White House Chief of Staff, Jake and Vanessa underwent a vetting process organised by David Rosen. Jake informed David of his and Vanessa's "open marriage" and that Vanessa was sleeping with another man. This man turned out to be a government employee who visited QPA after finding evidence that made him look like he's been selling government secrets to Russians. Being the wife of the NSA Director, Vanessa was in turn accused of giving the secrets over to her lover. The ordeal turned out to be Olivia planting false evidence about Vanessa's lover in order to get Jake to resign as NSA Director and destroy his chances at becoming the Chief of Staff. Jake and Mellie however retaliated by having Vanessa go on a tv interview and state that she was a "CIA operative" who was on undercover and "gathering intel" from him. The lie seemingly worked and Jake became the Chief of Staff. (Army of One)

After Mellie became a person of interest in the hijacking of the Vice President's plane, Vanessa worried that Jake may lose his job as Chief of Staff or even be somehow incarcerated. Jake assured her that he is safe and that he and the Vice President have a "solid working relationship" and will have a "central role in his administration". Later, Vanessa overheard a conversation Jake is having with Lonnie Mencken. Vanessa questioned Jake on what she heard and proceeded to accuse Jake of answering to the Vice President and so jeopardizing their journey to power in D.C. She stated that she was supposed to be "Jackie Kennedy" and not the "wife of the Vice President's bitch". (People Like Me)

During an argument between Jake and Vanessa over Jake working for Cyrus, Vanessa proceeded to visibly agitate Jake by taunting him, asking him if he "gets down on his knees" for Cyrus and accusing him of being Cyrus' bitch. The argument angered him and led him to kill her. Jake later stated to Cyrus that he was led to believe that he and Vanessa were partners from the beginning of their marriage until the moment she made it clear that they weren't so, he had to "dissolve the partnership". Vanessa is then shown lying on the kitchen floor with a pool of blood surrounding her head. (People Like Me)

Vanessa and Jake were married. They had very messy and rocky marriage in the beginning since Jake refused to open up to her. They both then agreed to be in an open marriage sometime off-screen. Although Jake married Vanessa only because of her connections and wealth, it appeared that Vanessa married Jake because she loved him and wanted to be with him. The marriage ended badly as Jake killed her after she accused him of being Cyrus' bitch.

Vanessa and Jake agreed to be in an open marriage and she started sleeping with Robert sometime off-screen. After Jake got promoted to the White House Chief of Staff, Olivia leaked the photos of Robert and Vanessa going into a hotel room and planted false evidences about Robert being a traitor who is selling state secrets to the Russians in order to get back at Jake for taking her position at the White House. Vanessa was then accused of having an affair and giving the state secrets over to Robert. Their relationship ended as Jake and Mellie spun the story by having Vanessa go on a tv interview, deny the affair and state that she was a "CIA operative" who was on undercover and "gathering intel" from him. 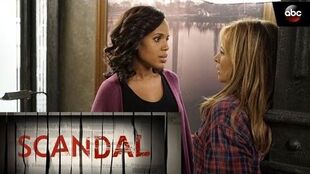 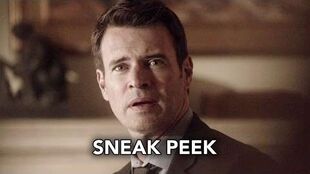 Retrieved from "https://scandal.fandom.com/wiki/Vanessa_Moss?oldid=71559"
Community content is available under CC-BY-SA unless otherwise noted.