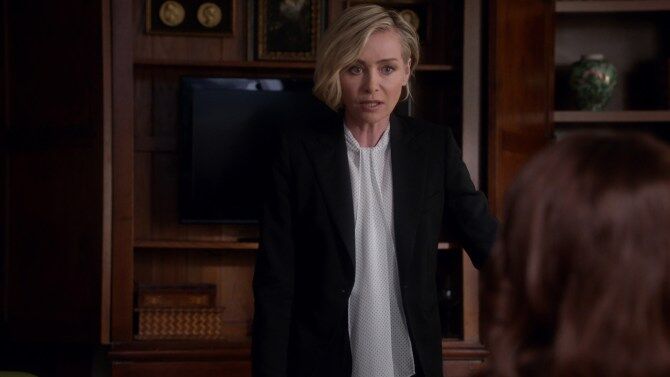 Trojan Horse is the eleventh episode of the sixth season of Scandal, and is the hundred-and-first overall.

Olivia and the team are determined to bring down Peus, but as the Electoral College vote nears, the fight for power claims another victim.

The episode opens with David and Samantha Ruland having sex. He goes into the other room to get them some water when Jake grabs him. Jake tells him that he's going to tell Samantha to leave because she is responsible for framing Cyrus. He tells him to be discreet because if she suspects that he knows anything she'll kill him.

Olivia shows Mellie what they have so far in their investigation. She asks what options they have. Olivia says there are none and that she needs to give up on the presidency. Mellie is having none of it. Olivia tells her that she has to that she doesn't want to win the presidency like this. Abby goes to visit Cyrus to show him that David has proclaimed his innocence and that he is to be released. Olivia goes to talk to Fitz about Mellie and how she'll seed the presidency to Cyrus. Fitz hugs her and tells her that she deserved the oval. She leaves. Abby takes Cyrus to a hotel room. He asks to see Ella but Abby says that Michael Ambruso said no to visiting him. Cyrus asks to be alone and she reminds him that he's the next President of the United States. 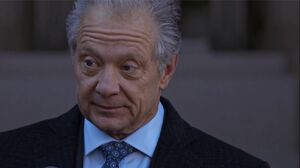 Elizabeth North goes to visit Mellie. She tells Mellie that she belongs in the oval. Mellie asks why she's here. Elizabeth says that she respects her but if she's going to back down so easily then she should've never have voted for her. Olivia, Charlie, Huck, and Quinn are meeting at Olivia's apartment. Mellie shows up and tells them that they should just leave it to the electors to decide who is going to be president. Olivia says it wouldn't be fair. Mellie says that she can't do it, she can't concede. She tells Olivia that she can help Cyrus all she wants but that she isn't going to give up. Olivia and her team go to work to try to change Cyrus's public image. Olivia goes to visit Cyrus at the hotel. She asks if she can come in so that they can talk. He says no because she told him that she'd never speak to him again while he was in prison. She tries to convince him to have faith about the electoral vote but he says no. He tells her that she doesn't get anything anymore from him. She tries to argue but he closes the door on her.

Fitz and Angela Webster talk about Cyrus and how Olivia is connected to Tom Larsen. Fitz says he doesn't want to talk about the inner workings of Olivia Pope. Olivia gets a call from Eli Pope. She goes to see him and he tells her that if Cyrus becomes president she'll die. She is adamant that she will win. He says that if she ignores his advice than he is useless to them. She leaves and returns to her office where Luna Vargas is giving an interview supporting Cyrus. Michael gives an interview about Cyrus. He says that he doesn't believe that Cyrus killed Francisco Vargas but that he is a liar and a cheater. Olivia calls Mellie to see if she was behind the interview. She says no. Olivia goes to visit Fitz and tells him that she went to see her father. She tells him that they need to focus on Cyrus because he needs us. Fitz goes to visit Cyrus. they share a drink and talk about how Cyrus feels about being out. Fitz asks what prison was like and Cyrus says it was hell. Fitz asks him if he remembers what he gave him in the hospital the night of the assassination: America. Fitz tells him that it's his and that Cyrus needs to take it.

Cyrus has a press conference. He says that Frankie loved this country and that as unworthy as he is his hopes have become his compass. He promises that if chosen to be president he will strive to honor Frankie's legacy. Mellie has a meeting with Elizabeth, Samantha, and Peus. They tell her that they got the votes for her to be president. She tells them that she doesn't want to win this way. She tells them to leave but Samantha bashes Elizabeth's head in with a golf club. Peus tells her that they are in control and she will do what they say. 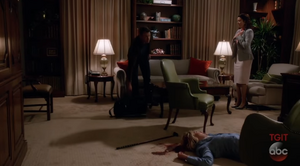 Angela goes to Fitz and tells her that she's submitting a warrant to have Olivia arrested. He says that she made Olivia her target from the beginning. Angela says that she's going to do it and that she hopes to see him later. Olivia arrives at Mellie's office after she called her to come. Olivia asks what happened. Mellie tells her that Samantha killed Elizabeth and about the votes. Olivia says there is a way to fix it but Mellie says that they don't care. Jake arrives and tells her that he's going to take care of the body. Olivia goes to see Fitz. He tells her about the warrant. Olivia says that that's good. That that is how they win. Fitz says that he won't let her go down for this. That he'd lose her forever. Olivia says that if her father goes to jail he will die. That if Fitz arrests her father then he will lose her. He tells her not to do this but she leaves. Olivia goes to see Cyrus and tells him that she's going to make this sacrifice so that he can be president. Angela storms into Fitz office after finding out that Olivia isn't going to be arrested. He tells her that she's being transferred or she can resign. She tells him that they're interfering in her investigation of the President's murder. Fitz says no that they have someone in custody. That someone is Eli Pope.

Mellie is watching the electoral college results. They elect her President. Olivia goes to Fitz and yells at him for taking her father. Fitz says he took him so that he could be under his protection. So that they could focus on getting Peus. Olivia and Fitz kiss and they proceed to have sex. 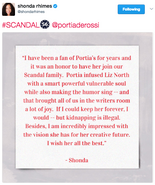 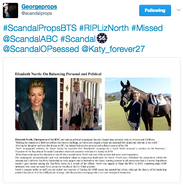 via @GeorgeProps
Add a photo to this gallery 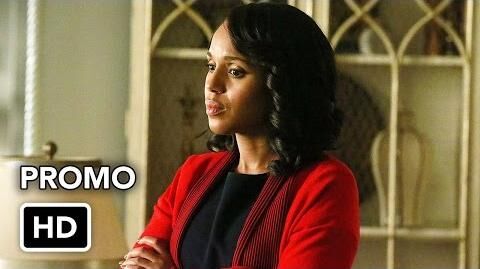 Mellie Becomes President; Olivia and Fitz Come Together - Scandal 6x11
Add a photo to this gallery

Retrieved from "https://scandal.fandom.com/wiki/Trojan_Horse?oldid=70614"
Community content is available under CC-BY-SA unless otherwise noted.