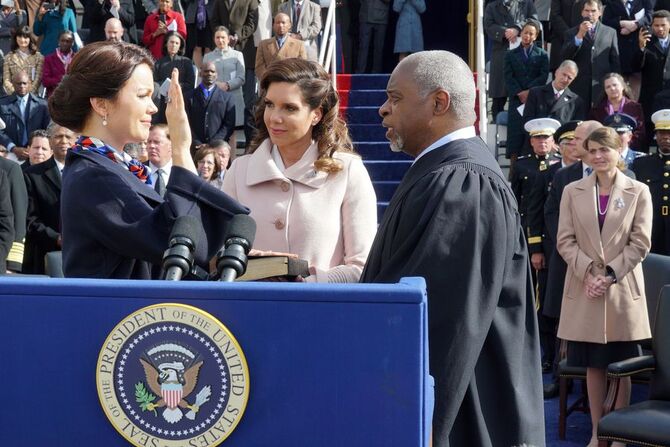 Transfer of Power is the sixteenth and final episode of the sixth season of Scandal, and is the hundred-and-sixth overall.

In the final days of his presidency, Fitz uses his power to make some unexpected changes.

Fitz Grant walks into his room and finds Olivia Pope in his bed. He's upset that Maya was released but she says that it had to be done. She tells him that he needs to trust her. She says that she doesn't want to spend their last night in the White House arguing. They proceed to have sex.

Maya Lewis is seen at a diner where she ditches the FBI who were following her. She did this by digging out her tracking device. Quinn, Charlie, and Huck try to figure out if her handler was nearby. Fitz, Mellie, Jake, Olivia, and Luna Vargas are talking about the inauguration. Jake promises that this is the most protected event. Luna says that she'll be out there with Mellie but that she isn't bringing her children up there with her. Mellie agrees but asks that Jake run the operation personally.

David Rosen helps Fitz put aside funds for Eli Pope which will be used to bring back B613. Cyrus is seen at home eating brownies instead of going to the inauguration.

Fitz, Luna, and Mellie arrive on stage at the inauguration. Eli is out there trying to find Maya. Quinn Perkins, Huck, and Charlie are trying to locate Maya by tracking her phone or the phone of the person who hired her. Maya comes up behind one of the snipers and takes their gun. Huck locates one of the phones but it's in the capital at the inauguration. Mellie is sworn into office. Olivia gets a phone call during the ceremony. Maya calls her and asks her to move a couple feet so that she doesn't hit her when she kills the one who hired her. Olivia begs her not to kill Mellie buy Maya says that she wasn't going to kill Mellie. Maya says not to worry because its handled. Maya doesn't end up firing a shot because she is shot by Eli.

Olivia returns to the White House and meets with Mellie and Fitz. She yells at Fitz for ordering Eli to take out Maya. Mellie tells them that she would rather go pick an outfit out for the ball tonight instead of discussing how she might die. Fitz gets a call from David. Abby delivers the inauguration seating chart to Quinn. Quinn asks her to take over OPA. She says that she needs to start over somewhere normal with the baby. Abby says what about Charlie. Quinn says she loves Charlie but he doesn't know how to be normal. Abby asks if she can think about it and Quinn says don't take too long.

Olivia goes to visit David. She asks him why he visited Fitz. He tells her that he can't show her. She threatens to get him fired if he doesn't show her. Olivia goes to see Fitz and accuses him of recreating B613. He says it'll be different this time because he'll be running it. Fitz says that this is his chance to make a real difference and that she of all people would understand that. Olivia tells him that she was going to ask him to stay here with her. He says now he is. She says but not like this. Fitz comes to tell Olivia that he rescinded the order and that she was right. He says she saved him but that he can't stay because he has a foundation to run. He says goodbye and leaves her. As he's walking to the helicopter to leave, she runs out after him and kisses him in front of all the reporters. She tells him that it's been an honor and he says the honor has been all his. The chief usher has to switch over the house from one president to another in four hours.

Olivia asks for the footage of Francisco Vargas assassination. She realizes that Luna didn't have the kids up on stage with her then either. Olivia realizes who Maya was aiming at. She goes to visit Luna. She tells her that it's over and that her plan failed. She asks if there is a plan B. Luna says that if she had evidence she'd be in handcuffs if she had proof. Luna says that she can't hurt her because she is the Vice President of America and that if something happens to her then Mellie's presidency is a non-starter.

Olivia goes to visit Jake and tells him that she's pissed. That they can't touch Luna and that it's done. Olivia visits Maya in the hospital. She tells her that was going to shoot Luna and Maya says yes. Maya asks what she's gonna do and Olivia says nothing because Luna has all the cards. Olivia says that she deserves the white house and Maya says do what she needs to do to get it back from Luna.

Olivia is picked up by Jake to go to the ball but before they go they visit Luna again. Olivia says that she has found a way forward and that Luna is going to die. Luna tries to call her secret service agents but they ignore her. Olivia tells her that she's going to kill herself. Luna tries to defend herself by Olivia's mind is set. She tells her bullets or pills. Luna swallows the pills. Olivia leaves and Jake waits for Luna to die.

Olivia and Cyrus sit on the steps of the Lincoln Memorial. They share a drink. Olivia tells him about Luna. Cyrus asks how they are going to get rid of her. Olivia says that he's the one that put the idea into Luna's head so that Olivia could get rid of Luna and make him VP. Cyrus brings up the executive order that Mellie signed. He says that it sounds to him that they both got what they wanted. She tells him to stay in town so that she can nominate him for VP. He asks her how it feels to be the most powerful person in all the world. She says it feels right.

Olivia and Cyrus Get What They Want - Scandal Season 6 Finale

Retrieved from "https://scandal.fandom.com/wiki/Transfer_of_Power?oldid=68786"
Community content is available under CC-BY-SA unless otherwise noted.