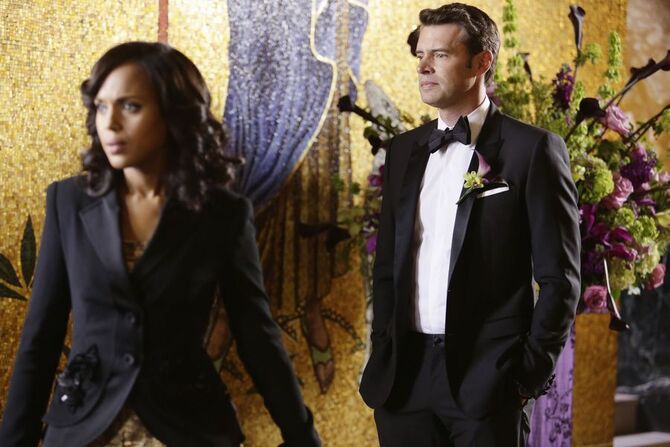 Till Death Do Us Part

Till Death Do Us Part is the eighteenth episode of the fifth season of Scandal, and is the eighty-seventh overall.

As Olivia deals with the aftermath of what she’s done, she finally finds out what exactly Jake and Rowan are plotting. But with their plans already in motion, Olivia is forced to make a gut-wrenching attempt to try and stop it. Meanwhile, in flashbacks, we learn more about Jake’s past and how he first got involved with B6-13.

A flashback shows a young Jake sitting on the porch playing with some toy army soldiers. Inside the house, his father is heard berating and beating his mother for interfering with his evil late night visits to their daughter's bedroom. Years later, an incarcerated Jake receives a visit from Papa Pope. This is the first time the two of them have ever met.

Jailed Navy man Jake (who went by his real name of Pete Harris back then) is told he'll be thrown out of the military and spend the next 10 years in prison unless he signs on to work with Papa P. Jake reluctantly becomes part of a training team that includes Charlie. His rebellious attitude only gets him a beating at the hands of Papa Pope. Charlie takes over with the thrashing. Jake still won't break. He's tossed in the hole for a month.

When Jake reemerges from his isolation, Papa Pope questions him about how he coped before going off on a venom-laced rant about his tortured childhood. Jake is distraught. Papa Pope assures him that he is not his scumbag real father, but he is his family now and he will take care of him. Jake finally breaks. He embraces Papa Pope accepting his new fate.

In the present day, Papa Pope lets his bedbound daughter know that she's in the clear regarding the death of Andrew Nichols. He also reveals that Jake and Vanessa's wedding has been bumped up to this week. Papa Pope is pleased to see his daughter up and about. Olivia goes for a morning jog. She meets up with Quinn and Huck revealing that she's fooled her father and Jake into believing she's an emotional wreck over the whole "bashing the former vice president's skull in with a metal chair" thing.

The guest list for Jake and Vanessa's wedding comes in at about 600 people. It's as high profile of a wedding as they come. Olivia wants to get more information from Jake by exploiting his weakness, which happens to be her. A tearful Olivia tells Jake that she can't go to his party at the White House because that's where she killed Andrew. It's all an act. This leads to Jake getting into a fight with Vanessa and a stern lecture from Papa Pope.

At the White House, Fitz admits to Jake that he's surprised that he's getting married. The conversation turns into one about Olivia. Speaking of Liv, Jake comes home to find her drinking in the dark. Olivia convinces him to join her. She gets Jake to admit he doesn't really love Vanessa. Then more truth comes out. Papa Pope wants to put Jake on Edison's ticket as his vice president.

Olivia tells Jake that he doesn't have to get married. She retreats to her bedroom. She steps back into the hallway to find Jake standing there. The two of them share a passionate kiss. The next morning, the two of them exchange knowing looks at breakfast until Papa Pope leaves. Then they hold hands. Jake wonders what to do next. For the moment, they'll just have breakfast.

Jake lets Olivia know that he doesn't want to marry Vanessa. He wants to be with her. Olivia wants to be with him, too. She suggests Jake ditch Vanessa at the altar. This will destroy his political prospects going forward. It's the perfect plan. Too bad Papa Pope knows all about it. He tells Olivia that if the wedding doesn't go forward, he will slit Jake's throat. A wedding or a funeral? The choice is Olivia's.

Olivia lets Jake know that she can't be with him. He should marry Vanessa. Olivia tells him that he's not good enough for her. He's nothing more than a booty call. She would eventually tear right through him. Olivia unleashes some more venomous words capping it off by saying that she will always choose Fitz over him. She coldly wishes him good luck becoming vice president. Olivia walks away, right past Fitz in fact, obviously upset by what she's done. A short time later, Jake is at the altar saying "I do" to his new bride.

In the past, Jake is given a choice between having a normal life or doing the B613 thing. He thanks Papa Pope for all he's done for him before going home to shoot his father dead. Jake pulls an old army figure from his hiding place on his porch holding it in his blood-stained hand. He then returns to Papa Pope and his new home inside B613.

"I'm not in love with Vanessa. You know that. You've felt that. The truth of the matter is that I'll never love anyone as much as I love you. You have never chosen me. We've done horrible things to one another. But for some reason, I still end up here. In front of you. Looking at you. Wanting you. In love with you."

"If I had to share DNA with your father, I'd loathe myself, too. 24 separate police reports citing domestic abuse in your house. Photos of your mother's lip split wide open. The time he punctured her lung when he drove his fist through her ribs. Tell me, did he rough her up just because she had the audacity to question why he would leave their bed in the middle of the night, lay with your sister in her bed while she was sleeping?! Could you hear it? From your room? Could you hear your father force himself on her from your own bed? I have to be honest. As sick as he is, it's pretty disgusting to know that you did nothing to stop him."

"You want to hit me, son? You want to do to me what you didn't have the courage to do to your father? Then go ahead! Do it! That won't change what happened. There is no redemption here. I am not him. I will not hurt you. I will protect you. I am here for you, son. Look at me. He is not here. I am. I am your family. I will take care of you. Let him go." 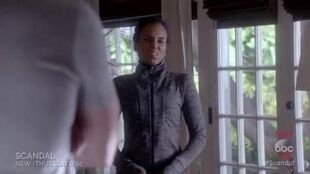 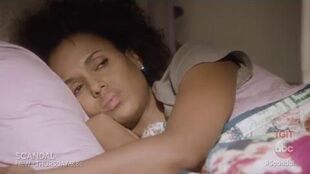 Olivia Fakes Being Drunk To Get Info - Scandal

Olivia Breaks It Off With Jake - Scandal

Rowan Helps Jake Deal With His Past - Scandal

Retrieved from "https://scandal.fandom.com/wiki/Till_Death_Do_Us_Part?oldid=68763"
Community content is available under CC-BY-SA unless otherwise noted.