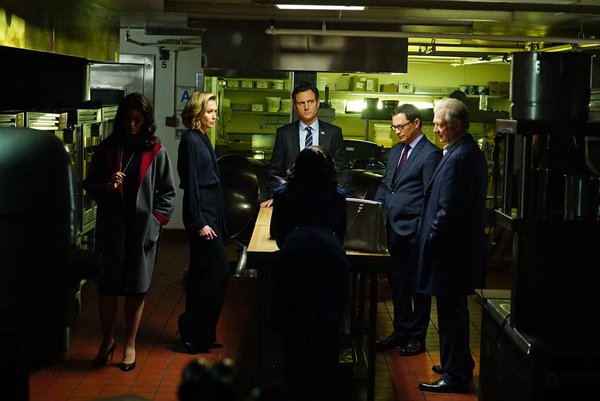 Thwack! is the seventeenth episode of the fifth season of Scandal, and is the eighty-sixth overall.

The election is in full swing, which means everyone is doing their best to take down their opponents, but when a potential leak threatens several candidates, they have to work together to keep their secrets safe. Boundaries are pushed and lines are crossed as we find out just how far some people are willing to go to protect themselves 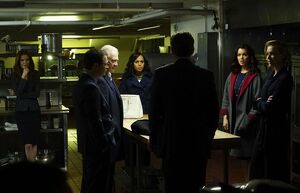 Abby lets Fitz know that one of the women he slept with, Lillian Forrester, has met with Andrew Nichols, who has recently regained his ability to speak. The once-comatose ex-veep is now talking all about how the president went to war for his mistress. Olivia is surprised when Andrew reveals that her friends are the ones responsible for his stroke. Cyrus is positively giddy at a secret meeting with Olivia, Fitz, Mellie, David, Elizabeth and Abby. He enjoys seeing them all sweat, as he has complete immunity. Elizabeth suggests they kill the former veep, but the others put the kibosh on that notion. Nevertheless, Liz approaches Huck to take care of things. In other news, Mellie’s visit to smooth things out with Andrew goes well at first. Then it goes south. These two have mutual disgust for each other. Cyrus kills Alex’s idea for putting out a commercial where his governor brother looks truly heroic. They use the concept on social media instead. Before the ad gets scrapped, Alex notices Tom in the raw footage. He snaps some photos of him getting chummy with Cyrus. He later shows the pictures to Michael.

Olivia awakens from a nightmare realizing that Huck is the one who put Andrew in a coma. She orders her fellow gladiators (minus Marcus) to get rid of all evidence related to the war and links between Andrew and Mellie. Olivia asks Papa Pope for help keeping tabs on Lillian. Jake is on the case. But Papa Pope assures Olivia that when her plan doesn’t work she’ll only have one option left. Huck jabs a needle into Andrew’s neck. He brings him to the secret room below the White House. Olivia assures Andrew that they are there to protect him. They’ll also help him financially. Andrew wants $10 million and Olivia’s representation in his book deal. The secret meeting society gathers once more to see who will pony up the money. The 10 million bucks is transferred. Then Andrew goes back on his word. He’s still going to talk. Fitz wants to go in front of the camera to implicate only him in the whole war fiasco. His mind is made up. Abby wants to shut down this idea, but Olivia thinks this is a good thing. Fitz is finally doing what a true leader is supposed to do. It’s all very presidential. Abby still isn’t onboard as her career will tank. Olivia lets her know that she’s not a monster and she can always come back to OPA. That’ll be fun, right? Maybe not. Abby pays a visit to Andrew.

Olivia wants Mellie to go after the Latino vote. She wants her to meet with Cardinal Swarez, who is reluctant to endorse the senator from Virginia until Liv makes some good points. Marcus closes the deal. It may not matter though. Jake reveals that Lillian’s story has shifted. It’s now all about how Mellie is a cheater and a liar. Olivia realizes Abby is behind the story change. She runs the Oval now. Abby lets Olivia know that she’s no longer welcome in the White House without her permission. Maybe she is a monster. Olivia has been having flashbacks about her time in captivity. She calls Jake for a favor. She needs to get into the White House. Olivia visits Andrew in the underground room. She wants to talk about his best outcome. Andrew has nothing but vile things to say to her. It’s more than she can take. Olivia grabs hold of a heavy metal chair. THWACK! THWACK! THWACK! Olivia Pope beats Andrew Nichols to death.

Fitz holds Olivia close. He promises everything will be okay. Abby enters the room. She’s horrified at the bloody scene. Olivia lays out all her next moves. She also warns Abby to never cross her again. A short time later, news of Andrew’s death from an unfortunate fall breaks. Fitz addresses the nation. As for Olivia, she gets cleaned up. Quinn and Huck drop her at home. Not her apartment. She’s left at Papa Pope’s house. Welcome home, Olivia. Welcome home.

Abby Does The Unthinkable - Scandal

Retrieved from "https://scandal.fandom.com/wiki/Thwack!?oldid=70897"
Community content is available under CC-BY-SA unless otherwise noted.