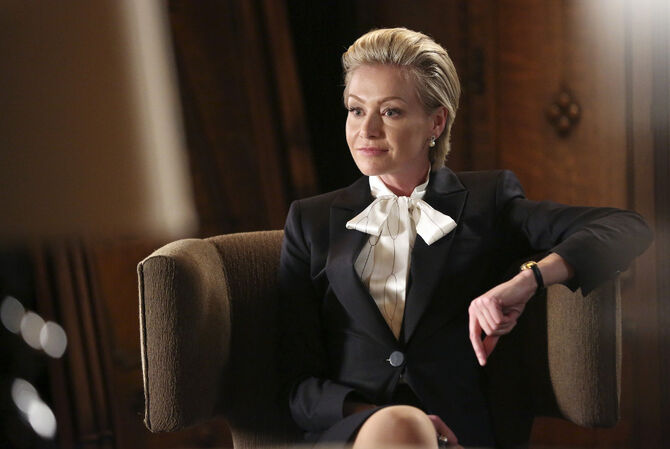 The Last Super is the eighth episode of the fourth season of Scandal, and is the fifty-fifth overall.

Fitz and Jake continue to fight over Olivia, but Olivia needs them to focus on the real prize, taking down Command. Meanwhile, Huck longs to connect with his family and Quinn continues tracking Kubiak. Back at the White House, Cyrus' exploits finally catch up to him, but Elizabeth North's plan is much bigger than anyone ever expected.

Jake is an innocent man. He knew this all along. Now others know it as well. Olivia and Fitz want to take down Rowan. Jake only wants blood. He insists that the president address him as Captain Ballard. Only his friends call him Jake. Olivia convinces him that killing Rowan is not an option. Such vengeance is for those who sit in the darkness. They stand in the sun. Jake mentions the thousands of B613 files he has stashed away. It’s a plethora of incriminating evidence. The president extends his hand. Captain Ballard shakes it. No hard feelings. Vice President Andrew Nichols takes a moment to shake hands with the kitchen staff at the hotel where he was giving a speech. BOOM! The car he was headed toward before his unplanned detour is blown up in a terrorist act. Andrew assures a worried Mellie that he’s okay after the bombing. If his injuries were more severe, he wouldn’t be able to straddle the First Lady like he does. Mellie admits that the bomb woke her up. She asks Andrew for a second chance. Judging by the passionate kiss they share, the vice president is up for that. 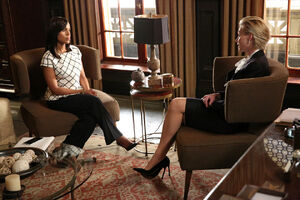 Elizabeth North thinks someone is bugging her phone. Many are looking for her to be removed as head of the Republican National Committee. Olivia doesn’t like Elizabeth, but she does agree to help her. She knows Cyrus is the one bugging her phone. She learns about Michael. Cyrus asks for Olivia’s help. He wants her to stop Elizabeth from destroying him as well as the president. Olivia orders Cyrus to stay away from Michael after finding out there are pictures and videos of the two of them. That’s easier said than done. Olivia confronts Michael as to why he didn’t give away more secrets to the woman who hired him. It’s because he cares for Cyrus, who makes Michael drop his pants when he shows up at his place. It’s clear he’s the one in control now. Huck is sent to investigate Elizabeth’s secret apartment. He brings Javi on his stakeout assuring him that they can still hang together. At the moment, however, Javi needs to run off to get some ice cream. Huck doesn’t want him to see what Elizabeth is about to do with the man in her secret pad. They guy inside is Dan Kubiak. Quinn has been tailing him. Kubiak is asked to leave so the newly-arriving Andrew can suck face with Elizabeth. The window inside the surveillance van is obliterated. It’s Kubiak. He grabs Huck by the neck. He’s trying to kill him. Quinn unsuccessfully tries to fight him off. Huck is able to get the upper hand. He musters enough strength to kill Kubiak. Huck is horrified when he realizes that Javi saw the whole thing. 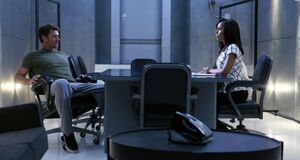 David Rosen hears about the incriminating B613 files from Olivia, Fitz and Jake. Of course, he already knows all about them. This is something he and Jake are keeping between them for the moment. David is tasked with finding a legal way to discreetly take down Rowan. Fitz wants Olivia to kiss her. He realizes that she feels that doing so would seem like she’s being disloyal to Jake. That doesn’t stop the president from telling her to kiss him again, and again, and again. Finally, Liv kisses Fitz. She then moves to leave. She wants Fitz to go in another direction. The only problem with this is that they are in a bunker. There’s only one way out. Fitz smiles as Olivia hurries off without him. Rowan assures Olivia that he is her father. He is her family. He will always be there waiting for her after those “boys” are done with her. Later, Olivia stands in the background as Fitz and Jake argue about the best way to take down Rowan. She calls her father while in tears. She tells him he was right. All those “boys” want to do is fight. She claims it was never about her. Rowan is compassionate to his daughter’s pain. He has no idea it’s all an act to lure him into the light. 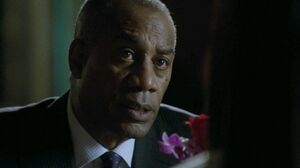 Rowan gives an impassioned speech about how he wasn’t the greatest father during their dinner date. Everything he’s ever done is because of her. All the while, snipers are setting up a perimeter. The father-daughter conversation is being watched via video feed by the president, Jake and some of the highest government agents at the White House. Rowan continues his speech. He lets Olivia know that whatever they had is now over. He is leaving her. The men she’s waiting for outside are dead. This is because of her. Silent bullets streak through the night killing all the outside forces. Those at the White House watch with horror. As for those B613 files that were confiscated, they are all blank. Rowan continues with his speech to his daughter. He lets her know that she is now on her own. If she thinks the world is a terrible place with him in it, she’ll now be seeing what it’s like without him.

Scandal 4x8 Mellie Explains Her Past Distance to Andrew

Retrieved from "https://scandal.fandom.com/wiki/The_Last_Supper?oldid=68727"
Community content is available under CC-BY-SA unless otherwise noted.