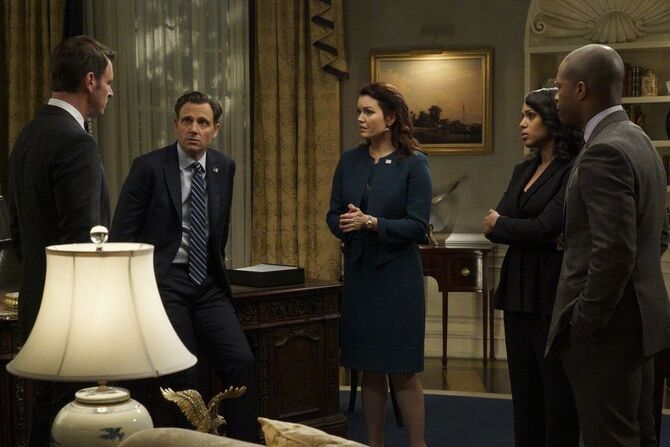 The Box is the thirteenth episode of the sixth season of Scandal, and is the hundred-and-third overall.

As the future of the country hangs in the balance, Olivia and Fitz are at odds with Rowan, and Jake employs surprising tactics to manipulate the Mystery Woman. 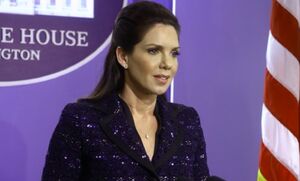 Luna Vargas holds a press conference to announce her candidacy for vice president with Mellie. Fitz Grant is dealing with a situation as 9 commercial drones hover over major cities across the U.S. Olivia Pope and Mellie Grant are watching the news when Theodore Peus calls Olivia. He tells her that she has something that belongs to him. He says Mellie is his president and he wants her back. He tells her that he'll detonate the drones one by one until Mellie and Samantha Ruland are released. To prove his point he detonates the drone over Dallas.

Fitz coordinates with local law enforcement and the national guard to handle the fallout. Olivia visits her father. He proposes that they have one last drink together before he leaves. She tells him that he isn't going anywhere. He invites her to come along but she tells him that she isn't done fighting. He tells her that if she doesn't go with him she'll die. Olivia leaves.

Olivia, Mellie, Marcus, Jake, and Fitz convene to create a plan. Fitz says that they don't negotiate with terrorists. Olivia suggests they use Samantha to find Peus. Jake goes to talk to Samantha. He tells her that if she tells him where Peus is that she'll go free. She says no that she isn't going to help him. He slams her head into the table and proceeds to cut the tracker implanted in her neck out.

Jake gives the tracker to Huck who is going to use it to track Peus. Abby has a visit from Cyrus Beene who tells her that Luna wants an update on what's happening. Marcus holds a press conference and gives the public an update on the situation. Fitz is trying to knock the drones out remotely but to no avail. Suddenly the drones begin to move as they get ready to attack. Huck almost finds Peus but the search activated a kill switch and shut him out. Olivia gets a call from Peus who tells her that she's bothering him. He repeats his demands but she tells him that they won't bend to the will of terrorist. The Philadelphia drone is detonated.

Fitz gets a call from David Rosen who raided Peus office but nobody knows where he is. Fitz says that Eli has to start talking because they are at war. Olivia and Fitz go to talk to Eli. He says the same thing that he told Olivia: he can't help. Fitz tells him that the only reason he isn't frying right now is that he can help. Fitz grabs hold of Eli and accuses him of working with them. Eli tells him that the republic is crumbling and that his only concern is to save himself. Olivia asks what they did to him but he just tells her to leave.

Abby updates Luna on the situation. Fitz arrives and asks if the Mayors have been briefed. She says yes and he asks if federal responders were dispatched to Philadelphia. Abby says no but that she'll get right on it. Cyrus says that maybe they should wait until morning and reassess the situation then. Fitz agrees and brings Cyrus along with him to another briefing. David tells Olivia that Eli has been getting weekly packages. Olivia says he never mentioned that.

Fitz, Jake, and Cyrus tries to come up with a plan concerning Samantha. Cyrus asks if she has access to the news. They say no. Cyrus says that they could tell her anything and that she'd have no way to confirm it. Jake goes to her and tells her that they have Peus. She doesn't believe him. He tells her that they are offering her immunity and that they don't need Samantha at all. Jake gets up to leave but Samantha tells him to wait. That she deserves the deal and that she'll give him names, bank accounts, and infostructure. Olivia and Huck start to investigate the packages that Eli was receiving. They look through surveillance and try to figure out what's inside of the boxes he keeps receiving. They find out that it was a brick but they don't know why he's getting them. Huck says it's for the weight.

Jake tells David that Samantha is going to take the deal but that she asked for him to give it to her. David goes to see Samantha. They talk and she asks if they can start over. He says no because she murdered Elizabeth North. She rips up the contract and says that they don't have Peus. He punches her in the face and she says that he better hope that she'll never get out of there. He says she never will.

Fitz says that he can't let them win. Fitz says that Olivia is what he's best at. Eli thanks him for the drink, clearly dismissing him. Cyrus tells Fitz that evacuations are underway for the cities with drones over them. Oliva and Fitz are drinking in the oval office discussing casualties. Fitz asks if he's going to bend to terrorists again. Olivia says he's not going to make that mistake again. Eli interrupts their meeting and asks to speak with Fitz alone. He tells Fitz that he knows how to make Samantha talk. Eli and Olivia go to visit Samantha. Eli apologizes before grabbing the gun from the secret service agent and freeing Samantha. They escape together. Abby and Cyrus talk in the hall. Cyrus says that he has to prove that she deserves her job to get back in. 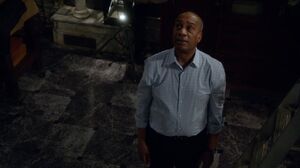 Mellie decides to give herself over to Peus. Olivia says no that she's about to be the first female president of the United States. Olivia says that she isn't leaving without a fight. Eli meets up with Peus. He demands that the boxes stop and that he never hear from them again. Peus agrees and Samantha makes the arrangements. Eli calls and tells Jake that Peus is on the move. Eli and the President had planned his escape all along so that he could lead them to Peus. Jake finds the command center and kills Peus. Eli ends up killing Samantha. The drones retreat and Mellie is kept safe. Eli adds the final piece to his dinosaur. He says that it made it, it survived. 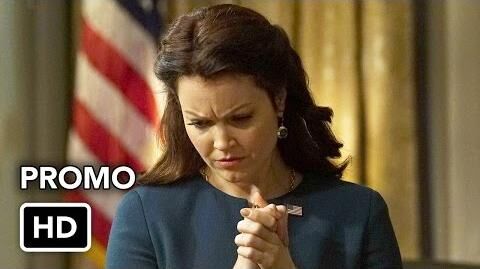 "Olivia, I'm sorry."
Add a photo to this gallery

Retrieved from "https://scandal.fandom.com/wiki/The_Box?oldid=70604"
Community content is available under CC-BY-SA unless otherwise noted.