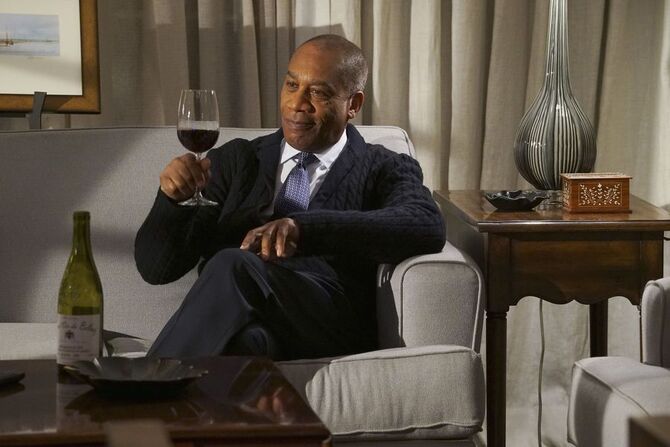 That’s My Girl is the twenty-first and final episode of the fifth season of Scandal, and is the ninetieth overall.

As each presidential candidate gets ready to announce their running mate, Olivia finds herself in a potentially dire situation. Meanwhile, Cyrus is presented with damaging information that could alter the presidential race entirely.

Jake shares an afternoon drink with Vanessa’s father. The conversation is pleasant, even touching, right up until the time one of the men starts clutching his chest. Jake lets his father-in-law know that a different papa believes his new wife’s inheritance will help with his plan. So Vanessa’s dad has got to go. A fake frantic 911 call is made at time a time when it’s already much too late. 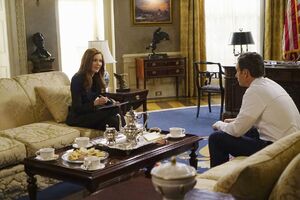 Cyrus wants David Rosen to be Frankie Vargas’s running mate, and he doesn’t even have to kill anyone. In truth, Cyrus wants David because both he and Vargas are cut from the same cloth. Elizabeth gets wind of this meeting. She wants in on the campaign. She hops on his lap and plants a hard kiss on David as part of a debasing initiative to convince him to run. Whatever works, right? Governor Bill Wagner seems to be the perfect vice presidential candidate to run with Mellie if it weren’t for the pesky fact that he dealt cocaine in college. Huck and Quinn take care of that loose end, or so they thought. Media reports surface about the governor’s checkered past. Edison delivers the “chasing the sun” message to Olivia. Jake wants to know the plan. There isn’t one yet. Olivia assures him that she’ll find a way to free him from her father. She needs Jake to trust her though. Elsewhere, Eli “Papa” Pope blackmails Cyrus to convince him to add Jake as Frankie Vargas’s running mate. He’ll expose the Harrisburg hostage setup if he doesn’t get what he wants. Cyrus goes to Olivia for help.

Mellie believes the speech Fitz wants to give opening night of the Republican National Convention is an abomination. She calls him out on it. Fitz assures her that his speech is the best way to help her. Mellie doesn’t buy it. She thinks it’s just her ex-hubby just getting one more chance to tell the world how great he is. Mellie assures him that the stage at the convention belongs only to her. 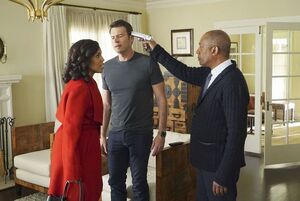 Fitz contemplates where he’ll end up after his White House run ends. Vermont pops up as a possibility. A short time later, Fitz finds a copy of Olivia’s medical records on Abby’s desk. He’s furious. A short time later, Olivia wants to make Jake Mellie’s running mate. She breaks this news to Fitz in the Oval Office. The two of them have a seat. Fitz admits that he misses her. He also apologizes for not listening to her more. Fitz also lets her know that he supports her choice, not that she needed it. Olivia bursts into her father’s home declaring that Jake is about to be announced as Mellie Grant’s running mate. She wants the future veep candidate to exit the premises with her. Papa Pope holds a gun to Jake’s head. It’s a standoff, a showdown. Olivia takes Jake by the hand. She assures him that her father won’t hurt his son. The two of them walk out of the house together. Jake is announced as Mellie’s running mate and David is told that he won’t be V.P. to Vargas. Tom suggests to Cyrus that he become his new Michael. He appreciates the thought, but doesn’t want to ruin what they have. A short time later, Cyrus dumps Tom. He’s getting back together with Michael. All this transpires as Frankie Vargas is about to announce his running mate. Olivia calls Cyrus. She knows he was never planning on it being David Rosen. He wants the job all for himself.

Jake doesn’t want to be vice president. He’d rather move into a quaint little house with Olivia. He dares her to be normal. That’s not going to happen. Olivia doesn’t want to live an unimpressive life. Jake gets the picture. He’s gone from being under Command’s thumb to being under his daughter’s. Jake takes the stage with Mellie to cheers from the crowd. Papa Pope watches the festivities on TV while enjoying a lot of wine. He raises a glass to his daughter while speaking aloud to no one. He simply says, “That’s my girl.”

"I didn't have a $100 million trust fund, a political legacy. I didn't go to the best boarding schools on the planet, and I am not a white man. I am here on my own. I got here on my own. I got here because I managed to escape you. Like Liv managed to escape you. You talk about what a great president you are, and yet you whined and cried about how much you hate the job every chance you got. Do those people out there who love you know how many times you tried to walk off the gig? How privileged and entitled do you have to be to think of the most powerful office in the world as a prison? Unlike you, Fitz, I want this. Unlike you, I earned it. And unlike you, I will not squander it. This stage is mine!" 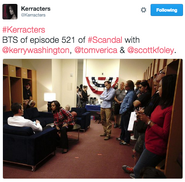 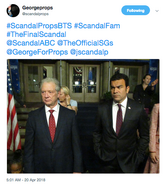 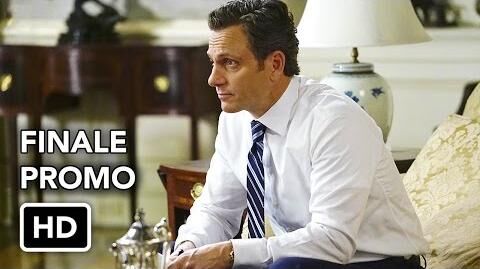 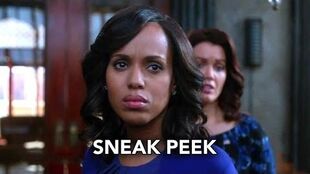 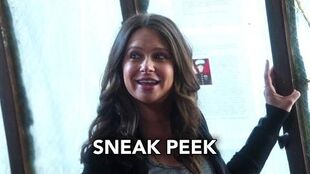 Olivia and Jake Scandal 5x21 "I'll save you. Somehow"

Retrieved from "https://scandal.fandom.com/wiki/That%27s_My_Girl?oldid=70913"
Community content is available under CC-BY-SA unless otherwise noted.