"Baby Made a Mess"

Susan became OPA's Client when it was revealed that Abby's ex-Husand Charles Putney was also running for the Senator position. Olivia made sure that Susan Ross would win by becoming her campaign manager. "Baby Made a Mess"

Senator Susan Ross of Virginia pushes herself on Mellie to talk about issues such as vaccination and booster shots. Later, Mellie gets wind of the fact that Fitz may be grooming the charismatic New Mexico governor for the vice presidency. This would hurt her chances of becoming president. This is not the deal they made. That’s why Fitz sabotages the governor’s chances. They need someone who won’t get in Mellie’s way. Introducing Senator Susan Ross of Virginia. "The Lawn Chair"

Fitz introduces Senator Susan Ross, his nominee to be the next Vice President of the United States. Things get off to a fine start. Susan is following the script flawlessly. Then the enormity of the situation catches up with her and she has a mini-meltdown involving a snort-filled laugh. All Fitz, Mellie, Cyrus and Abby can do is force smiles as this train wreck unfolds before their eyes. "The Testimony of Diego Muñoz"

When the Fitz Grant and Olivia Pope photos are leaked Susan find it hard to adjust to the White House. She goes to see David Rosen to tell him that she wants to quit as Vice President of the United States.

During her presidential campaign, Olivia Pope & Assosciates do some digging and discover that John Latner is not the father of Susan’s daughter, Casey. The real baby daddy, Ronnie, is locked up in prison; Olivia will get him out if he plays ball. Olivia is angry that Ronnie won’t play ball with her, she threatens to set him up so that he’ll serve an even longer prison sentence. She tells Ronnie he has no idea what she’s capable of; Ronnie eventually caves. Plans to leak the fact that he’s Casey Ross’s daddy are set in motion until Huck tells Quinn they can’t follow through.

Susan went to see David in his office to discuss her position as Vice President of the United States. She wanted to quit but David managed to change her mind. Elizabeth wanted Susan Ross to run for President because the American people like her and because Elizabeth wants to get into the Oval office. After a heart-to-heart and a quick make-out session with David, Susan finally agreed to run for President; thanks to David calling her a "Warrior". 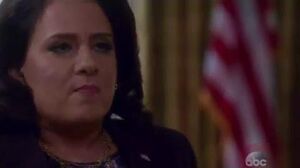 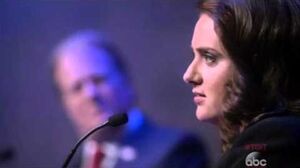 Scandal 5x16 "Come On Susan, Seize the Moment!"
Add a photo to this gallery
Retrieved from "https://scandal.fandom.com/wiki/Susan_Ross?oldid=70944"
Community content is available under CC-BY-SA unless otherwise noted.