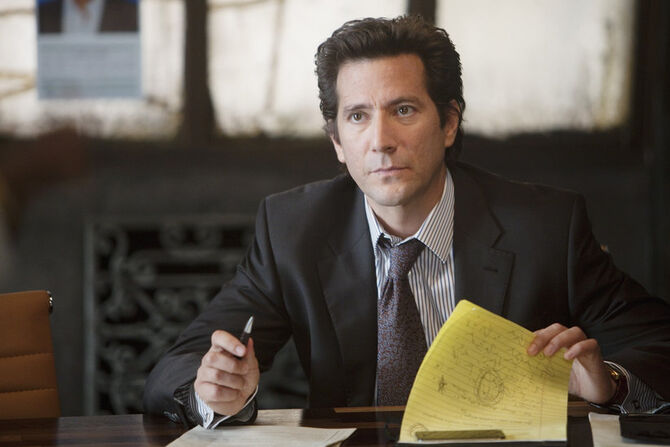 "You saved me." - Stephen to Olivia - No More Blood

Given his womanizing nature, Stephen Finch is skeptical about proposing to his only lasting, steady girlfriend, Georgia. With Olivia's urging, he does so, anyway. (Sweet Baby)

Stephen has had a past sexual relationship with DC coroner Lisa whom he tries to use his charms to get an autopsy report. But now that he's engaged and no longer available and since Lisa is mad that he never called his charms no longer work. But somehow he still managed to get the report from her. (Sweet Baby) More is learned about Stephen's past sexual relationships when the firm takes on DC's finest madame, Sharon Marquette, as one of their clients. Stephen admits that he was a client to Abby who becomes very judgmental, basically very Abby-like! When trying to explain to Harrison and Abby what some of the the most basic words and/or "terms" mean as sexual preferences Stephen helps the team out by explaining, once again Abby becomes very "Abby" and grossed out... but who could blame her! (Dirty Little Secrets)

Later, he reveals to Olivia that he plans on admitting to Georgia that he has been sleeping around with other women, hoping that she would call off the engagement.

To explain his absence Olivia reveals to Cyrus Beene that Stephen quit the firm to move to Boston and marry Georgia. (White Hat's Off)

After his departure, his office remained untouched under Olivia's refusal to let the others have the room, the associates - specifically Harrison & Abby - referred to it as a shrine. It wasn't until at least six months later when Olivia finally gives the office to Harrison after he did a "dirty job" for her betraying one of his close friends, a fellow associate, Abby. However, there was a positive result to Harrison getting this office... Harrison and Quinn no longer shared an office, Quinn finally got her own office. (Spies Like Us)

Stephen returns to Olivia's life to rescue her from her captors. Before parting, he and Olivia discussed various things, including Harrison's death and her offering him his old office back, informing him that his help was wanted, an offer that he declined. The two thanked each other for saving each other and went their separate ways. (No More Blood)

Given his womanizing nature, Stephen is skeptical about proposing to his only lasting, steady girlfriend, Georgia. With Olivia's urging, he does so, anyway, and she accepts.

Stephen had a brief fling with Lisa before asking Georgia to marry him. They slept together and he never called Lisa back; leaving her in a not so good mood, which made things difficult when he goes to ask for an autopsy report from her. But, he manages to still use his charm and get what he needs from her without having to use sex to get it. (Sweet Baby)

Retrieved from "https://scandal.fandom.com/wiki/Stephen_Finch?oldid=70797"
Community content is available under CC-BY-SA unless otherwise noted.