"Molly, You in Danger, Girl"

Seven Fifty-Two is the nineteenth episode in the second season of Scandal, and the twenty-sixth overall. It is the sixth flashback episode of season two and seventh overall.

Fitz and Olivia have an emotionally charged conversation unaware that they are being watched. Cyrus finally meets Jake, and Hal informs Mellie about Fitz's whereabouts.

Meanwhile, the gladiators - Harrison, Abby & Quinn - reveal information about themselves to Huck while he's in a trance repeating "752" over-and-over again-and-again. Who can break him from his trance... Olivia, Quinn or could it be Charlie???

And then there's the big question... what does "Seven Fifty-Two" mean?

A heavily-bearded homeless man gives a smartly-dressed woman some helpful information as she waits for her train at the station. The grateful commuter offers to buy the guy a coffee if he's going to be there the next day. He will be. This scruffy-looking, sad-eyed fellow is there every day. This is Huck five years ago. This is how he existed before he met that woman who offered him that coffee. This is what he was before he met Olivia Pope.

Abby takes a shot at getting through to Huck. She admits that her allegiance to Olivia cost her any chance of a real relationship with David. That's the price you pay for someone who saved your life. Harrison also tries to reach Huck, who he considers to be a real-deal gladiator unlike him. Harrison believes he's all talk. He promises to stand by Huck for however long it takes. In other news, Olivia pushes Fitz away as he tries to convince her that he loves her. Cyrus is not thrilled about the president spending all his time in the hospital for what he calls "a late night booty call." Mellie is also pretty livid that her hubby isn't home with her.

We jump back 14 years. Huck surprises the love of his life, Kim (guest star Jasika Nicole), when he returns home early from his tour of duty. He has a meeting in Washington. Charlie is in the room when a man named Crosby offers him a job. It's clear that this is an offer Huck cannot refuse. He says that he has no wife, no kids. That's the way the CIA likes their new recruits. Huck is welcomed into B613. Charlie tells Huck that the job he just signed up for is to kill people.

Huck is a quick learner as he develops a taste for killing. When he learns that Kim is pregnant, Huck asks her to marry him. He's overjoyed when she says "yes." The only other time he seems so happy is when he's torturing and killing his targets. Huck's work almost makes him miss the birth of his son. He realizes he's in trouble the day he comes home to find Charlie bouncing his baby boy on his knee. Before Huck can disappear with his family, the CIA abducts him. They lock him inside a caged hole (aka the hole) in the ground. He's kept there for months until he finally says exactly what the CIA wants to hear. He has no wife. He has no son. He has no family.

In the present day, Harrison is blocked by the Secret Service when he tries to visit Olivia in the hospital. He spots Charlie in the hallway but loses him after a brief chase. Harrison tells Olivia that he has a pretty good idea why the Secret Service is there. Fitz continues to tell Olivia that he loves her. He was angry because he wanted to win the presidency on his own. He didn't want her to fix him. Fitz gets Olivia to admit that she still loves him. The two of them kiss hard, but then Olivia leaves abruptly. When Fitz finally goes home, Mellie announces that she's leaving him. The clock is ticking for him to come to his senses. Once she starts talking to the press about her philandering husband, his political life will be over.

Cyrus orders Charlie to find out what kind of relationship Jake has with Olivia. Speaking of Jake, he meets with the mystery man we've seen before. The guy wants to use Olivia as bait to lure Albatross into the open. Jumping back to the past, Huck is thrown into action after the CIA broke him. But he just can't kill anymore. Charlie is ordered to take him out, but instead he tells Huck to disappear. Charlie then reports to his CIA boss that Huck is dead. The person he tells this lie to is the same man who has been meeting with Jake.

In present day, Olivia returns to the office. Huck is still huddled in the corner muttering "seven fifty-two" over and over and over. Olivia recalls the day they met at the train station. She says she talked to him because he had the saddest eyes she's ever seen. They were sadder than hers. She was all alone until she met Huck. The two of them became a team. She didn't save him that day. He saved her. Huck finally snaps out of his desperate state. He thinks he had a family, but doesn't know if they were real. Olivia helps him see that that they were. Then she helps him up off the floor.

We flashback to the past. Huck is at the train station. He sees Kim step out from one of the cars with a young boy, who wants to give some money to the homeless man. Huck manages to hold back all the emotion he is feeling as his son - Javi - slips a dollar into his cup. The two of them share the sincerest of looks before the boy turns to leave with his mom. Huck watches helplessly as they disappear up the subway station stairs. He then looks up at the clock hanging from the ceiling. The exact time this heartbreaking moment takes place is 7:52.

For a full list of cast/character credits in order as they appeared click here: Seven Fifty-Two Credits 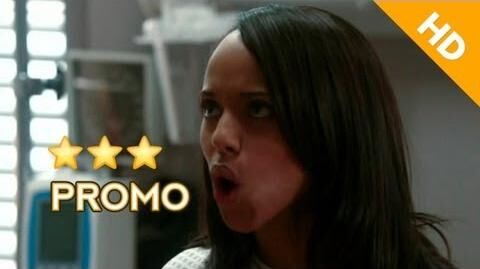 Retrieved from "https://scandal.fandom.com/wiki/Seven_Fifty-Two?oldid=71136"
Community content is available under CC-BY-SA unless otherwise noted.