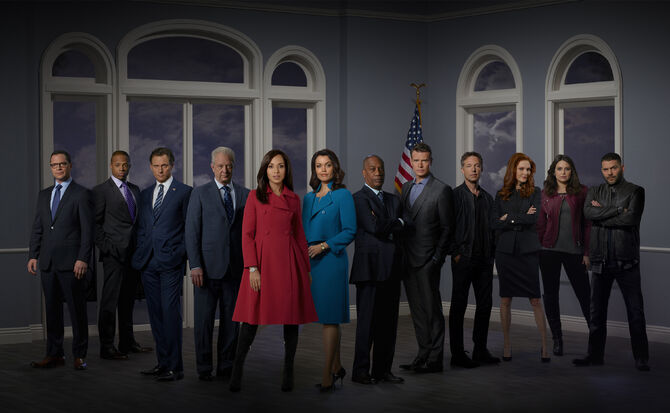 The season focuses on Olivia Pope and her new position as Chief of Staff of President Mellie Grant and the Command of B613. It also depicts Quinn Perkins as the boss of her crisis management firm Quinn Perkins & Associates, and its team, as well as staff at the White House in Washington, D.C., in their efforts to deal with and contain political scandals. Season seven has twelve series regulars out of which eleven return from the previous season and one new regular is added.

"Watch Me" October 5, 2017
Directed by: Jann Turner - Written by: Shonda Rhimes
One hundred days into Mellie's presidency, Olivia Pope is proving she can run the world; but to avoid an international incident, she may have to make her toughest call yet. Meanwhile, Quinn Perkins & Associates struggle to find their first client.
02 | 108

"Pressing the Flesh" October 12, 2017
Directed by: Tony Goldwyn - Written by: Matt Byrne
President Mellie Grant hosts a state dinner for President Rashad of Bashran in a first step toward peace in the Middle East, and in case Mellie’s charm alone doesn’t work, Olivia secretly puts Jake to work so that they are armed with a back-up plan. Meanwhile, the team at Quinn Perkins & Associates attends the party in hopes to gain more high-profile clientele.
03 | 109

"Day 101" October 19, 2017
Directed by: Scott Foley - Written by: Zahir McGhee
During the first 100 days of Mellie’s presidency, Fitz stays out of the limelight in Vermont where he takes up life as an ordinary citizen for the first time in years. Marcus joins the former POTUS to begin important work on the Fitzgerald Grant III Presidential Library.
04 | 110

"Lost Girls" October 26, 2017
Directed by: Nicole Rubio - Written by: Ameni Rozsa & Austin Guzman
While Liv is busy running the free world, the team at QPA works with an unexpected client to solve an important case. At the White House, Mellie prepares for the upcoming Nuclear Summit with President Rashad and Prime Minister Nazari.
05 | 111

"Adventures in Babysitting" November 2, 2017
Directed by: Oliver Bokelberg - Written by: Severiano Canales & Tia Napolitano
Olivia and Mellie assert their power like never before; meanwhile, Cyrus is working on congressional approval to declare war in Bashran, and QPA is keeping close watch on President Rashad’s niece.
06 | 112

"Vampires and Bloodsuckers" November 9, 2017
Directed by: Jann Turner - Written by: Chris Van Dusen & Tia Napolitano
The Gladiators come together to celebrate Quinn and Charlie’s big day, but events take a turn when Quinn goes missing. Back at the White House, Mellie meets with the Bashrani ambassador to deal with the aftermath of President Rashad’s assassination.
07 | 113

"Something Borrowed" November 16, 2017
Directed by: Sharat Raju - Written by: Mark Fish
The first half of the epic final season ends with shocking revelations and jaw-dropping events that will leave everyone reeling.
08 | 114

"Robin" January 18, 2018
Directed by: Daryn Okada - Written by: Juan Carlos Fernandez
On the midseason premiere, the fallout from Rowan’s desperate act affects all of Quinn’s loved ones, including a guilt-ridden Olivia.
09 | 115

"Good People" January 25, 2018
Directed by: Nzingha Stewart - Written by: Shonda Rhimes, Jess Brownell & Nicholas Nardini
The harrowing events that transpired in Rowan’s basement are revealed, from the moment Quinn was kidnapped to the earth-shattering gunshot that rocked Olivia to her core.
10 | 116

"The People v. Olivia Pope" February 1, 2018
Directed by: Kerry Washington - Written by: Ameni Rozsa
When Olivia agrees to join Fitz in Vermont for what she thinks will be a relaxing getaway, she is shocked to find that her closest friends have orchestrated a relentless intervention. Back in Washington, Cyrus finally reveals his suspicions to Mellie about Olivia and Jake’s extracurricular activities.
11 | 117

"Army of One" February 8, 2018
Directed by: Allison Liddi-Brown - Written by: Austin Guzman
Mellie’s plans to name Jake as her new chief of staff only propels Olivia to do whatever it takes to make sure that does not happen. Back at Papa Pope’s house, Quinn becomes restless, wondering just how long Rowan intends to keep her and Robin hidden from the outside world. Meanwhile at QPA, Abby, Huck and Charlie decide that it’s time to move forward with new clients when their first case leads to surprising intel.
12 | 118

"Allow Me to Reintroduce Myself" March 1, 2018
Directed by: Tony Goldwyn - Written by: Raamla Mohamed
In the midst of moving on from the White House, Olivia gets an unexpected visitor in criminal defense attorney Annalise Keating, who seeks her help in fast-tracking a judicial reform class action to the United States Supreme Court. However, after Olivia’s recent fall from political grace, it’s going to be more challenging than ever to get the support they need.
13 | 119

"Air Force Two" March 8, 2018
Directed by: Valerie Weiss - Written by: Severiano Canales
When Cyrus and David embark on a trip to Lisbon for the digital piracy summit, their plane is hacked, leaving their friends and colleagues on the ground little time to save them.
14 | 120

"The List" March 15, 2018
Directed by: Greg Evans - Written by: Jess Brownell & Juan Carlos Fernandez
After Air Force Two’s extraordinary safe landing, Cyrus takes his victory lap as America’s newest hero, and Mellie demands that the Oval stop at nothing until justice is served. Meanwhile, Liv tries to bridge the gap with the Gladiators by disclosing her theory behind the hijack and Cyrus’s true intentions.
15 | 121

"The Noise" March 29, 2018
Directed by: Darby Stanchfield - Written by: Raamla Mohamed & Jeremy Gordon
When Charlie is taken into custody for the hijacking of Air Force Two, Quinn is faced with an important choice. Meanwhile, Cyrus is pulling the strings behind closed doors and sets out to recruit Jake to join him on his quest for the White House.
16 | 122

"People Like Me" April 5, 2018
Directed by: Joe Morton - Written by: Chris Van Dusen
On the heels of her commitment to turn over a new leaf, personal turmoil strikes Olivia once again when Mellie demands that she get rid of Cyrus once and for all.
17 | 123

"Standing in the Sun" April 12, 2018
Directed by: Jann Turner - Written by: Mark Fish & Matt Byrne
Cyrus and Jake’s mission to take the White House reaches a new level of deceit when Liv is called to testify against Mellie.
18 | 124

"Over A Cliff" April 19, 2018
Directed by: Tom Verica - Written by: Shonda Rhimes
With the existence of B613 exposed to the world, the Gladiators make the ultimate sacrifice in order to take down Cyrus and Jake – but how far will they go to get justice?

Behind the Scenes Photos

The cast and crew of Scandal often post selfies, behind the scenes pictures and episode sneak peeks. 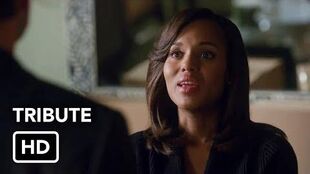 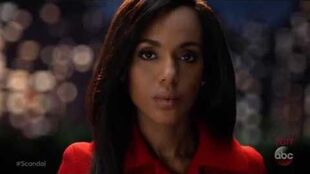 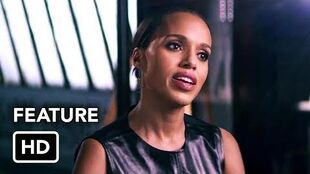 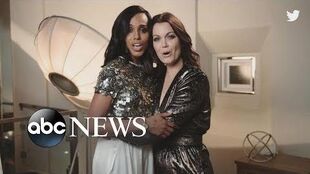 Celebrating the series finale of 'Scandal'

Retrieved from "https://scandal.fandom.com/wiki/Season_7?oldid=70575"
Community content is available under CC-BY-SA unless otherwise noted.