"Survival of the Fittest"

The season continues the story of Olivia Pope's crisis management firm, Olivia Pope & Associates, and its staff, as well as staff at the White House in Washington D.C. Season five has eleven series regulars, all returning from the previous season, out of which eight are part of the original cast of ten regulars from the first season and two new regulars were added.

Olivia Pope convinces him not to, because she thinks it will destroy him. Then she has Mellie reserve a percentage of the Pentagon's funds in a blind emergency trust and uses that money to reinstate B613 herself. Olivia becomes Command at the end of the season and considers herself the most powerful person in the world.

The entire season centers around the murder of President-elect Francisco Vargas. It is revealed that his wife, Luna Vargas, was behind his murder because she wanted power. The end of season six concludes with Mellie Grant becoming the first female President of the United States. At the end of Fitz's term, he decided to reinstate a B613 and become Command, due to Rowan's manipulation of him.

"Survival of the Fittest" January 26, 2017
Directed by: Tom Verica - Written by: Shonda Rhimes
The election results for the presidential race between Mellie Grant and Francisco Vargas are announced, and the shocking results lead to an explosive outcome
02 | 92

"Hardball" February 2, 2017
Directed by: Allison Liddi-Brown - Written by: Matt Byrne
Flashbacks show what happened on the campaign trail and to what lengths Olivia was willing to go for the win; Fitz and Abby face a national crisis; the gladiators work to get answers.
03 | 93

"Fates Worse Than Death" February 9, 2017
Directed by: Scott Foley - Written by: Mark Fish
In the midst of a national crisis, Cyrus’s fate is sealed. Meanwhile, Olivia and the gladiators will stop at nothing to get to the truth.
04 | 94

"The Belt" February 16, 2017
Directed by: Tom Verica - Written by: Paul William Davies
Cyrus faces his ultimate challenge but continues to stop at nothing to prove his innocence. Meanwhile, Olivia and the gladiators uncover shocking new evidence about the night Frankie was shot.
05 | 95

"They All Bow Down" March 9, 2017
Directed by: Millicent Shelton - Written by: Zahir McGhee
Jake and Vanessa’s messy relationship poses a threat to the campaign, forcing Olivia to take action. Meanwhile, a game-changing revelation about the conspiracy surrounding Francisco Vargas’s assassination is revealed.
06 | 96

"Extinction" March 16, 2017
Directed by: Tony Goldwyn - Written by: Chris Van Dusen
Rowan is caught by surprise when someone from his past resurfaces, and Olivia has to make a life-changing decision about the campaign. Meanwhile, flashbacks reveal exactly what happened the night of Francisco Vargas’ assassination.
07 | 97

"A Traitor Among Us" March 23, 2017
Directed by: Tom Verica - Written by: Alison Schapker
After discovering new information about the assassination of Frankie Vargas, Olivia makes a shocking decision and asks Huck to complete one of the most difficult tasks yet.
08 | 98

"A Stomach for Blood" March 30, 2017
Directed by: Olivier Bokelberg - Written by: Severiano Canales
The events leading up to election night are retold from Abby's perspective, revealing a formidable thirst for power and the explosive secret she's been keeping.
09 | 99

"Dead in the Water" April 6, 2017
Directed by: Nicole Rubio - Written by: Michelle Lirtzman
It’s a race against the clock when Olivia and OPA’s investigation into the conspiracy puts one of their own in grave danger.
10 | 100

"The Decision" April 13, 2017
Directed by: Sharat Raju - Written by: Johanna Lee
With the ugly truth behind Frankie's assassination revealed, a torn Olivia wonders how different her life — and the country — would be if she, Mellie and Cyrus had never rigged Fitz's election.
11 | 101

"Trojan Horse" April 20, 2017
Directed by: Jann Turner - Written by: Jess Brownell & Nicholas Nardini
Olivia and the team are determined to bring down Peus, but as the Electoral College vote nears, the fight for power claims another victim.
12 | 102

"Mercy" April 27, 2017
Directed by: Nzingha Stewart - Written by: Severiano Canales & Ameni Rozsa
Just when Peus’ iron grip seems inescapable to Olivia and everyone she holds dear, a shocking threat to the White House turns everything on its head.
13 | 103

"The Box" May 4, 2017
Directed by: Steph Green - Written by: Raamla Mohamed & Austin Guzman
As the future of the country hangs in the balance, Olivia and Fitz are at odds with Rowan, and Jake employs surprising tactics to manipulate the Mystery Woman.
14 | 104

"Head Games" May 11, 2017
Directed by: Zetna Fuentes - Written by: Chris Van Dusen & Juan Carlos Fernandez
While outgoing President Fitz considers his legacy, the Gladiators question what’s next for OPA, and Jake finally discovers the motivation behind Peus’s and the Mystery Woman’s reign of terror.
15 | 105

"Tick Tock" May 18, 2017
Directed by: Salli Richardson-Whitfield - Written by: Zahir McGhee & Michelle Lirtzman
As the clock ticks down to the inauguration of the first female President of the United States, Olivia takes a big risk to ensure Mellie’s safety.
16 | 106

"Transfer of Power" May 18, 2017
Directed by: Tony Goldwyn - Written by: Matt Byrne & Mark Fish
In the final days of his presidency, Fitz uses his power to make some unexpected changes.

→ For more images from behind the scenes Season 6, see the Category: Images from Season 6 BTS page 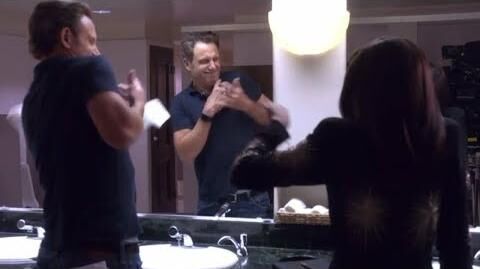 The cast and crew of Scandal celebrated their 100th episode by attending many events and parties, including the following: 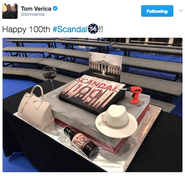 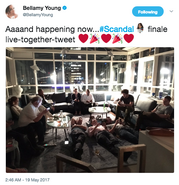 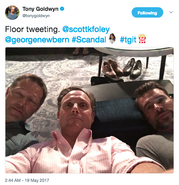 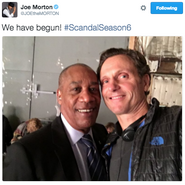 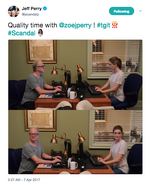 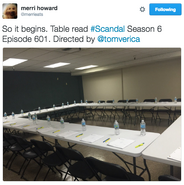 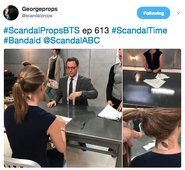 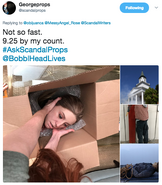 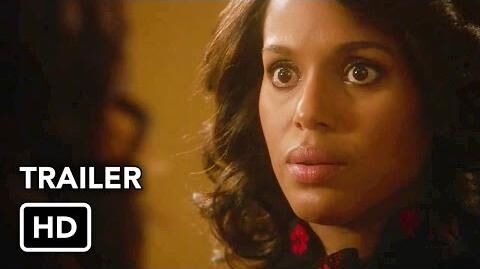 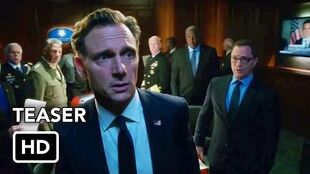 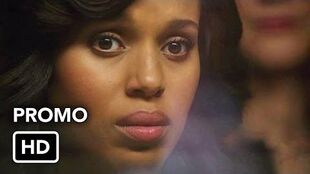 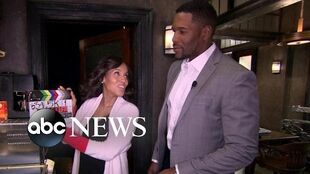 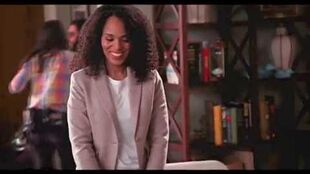