The season continues the story of Olivia Pope's crisis management firm, Olivia Pope & Associates, and its staff, as well as staff at the White House in Washington D.C. Season four had nine series regulars, all returning from the previous season, out of which eight are part of the original cast of ten regulars from the first season.

The season focuses on Olivia's return to Washington, D.C., after spending two months relocated on an island off the coast of Zanzibar with Jake, and how her absence has affected the people around her.

The first half of the season focuses on Jake's arrest for the death of Jerry Grant after Rowan forces Tom to name Jake as the operator. Rowan continues to try to make everyone believe Jake is guilty, which inspires Olivia to find out the truth for herself. After forcing Tom to reveal Rowan as his operator, Fitz, Jake, and Olivia make a plan to arrest Rowan. Unfortunately, the plan fails, causing Rowan to shut down B613 and start eliminating B613 agents. Olivia tries to kill Rowan when she confronts him, but he manages to flee.

The season also focuses on how Olivia Pope & Associates has been closed, which has led Abby, Huck, and Quinn to seek alternative employment.

Abby is now the White House Press Secretary, and is struggling with gaining the respect of Cyrus and Fitz, because they choose to demean her by calling her "Red" instead of Abby. Later in the season, Abby finds herself stressed even more by the presence of her abusive ex-husband, who has been nominated for Virginia State Senator, and she enlists Leo Bergen to help ruin his campaign. Huck is working at an electronic shop and is refusing to come back to the firm, but he eventually does. In the past two months, he has been watching his estranged family, but he has not been allowed by his former wife Kim to see his son, Javi. However, much to Kim's dismay, Huck and Javi begin to form a friendship by playing video games together.

Quinn has stayed in contact with both Abby and Huck, in addition to trying to find Olivia. During the first part of the season, Quinn works on a case for Olivia's friend, Catherine, from law school, in which Catherine's daughter ends up murdered and Catherine's grief-stricken husband commits suicide. The case takes an unexpected twist when Quinn discovers that the killer of Catherine's daughter, Kobiak, has been working with both the head of the RNC, Elizabeth North, and Vice President Andrew Nichols. Their plan is revealed as an attempt to start a war in West Angola. Elizabeth North and Andrew Nichols then engineer the kidnapping of Olivia, anticipating that Fitz will do anything to save her. Predicting correctly, Nichols then successfully convinces Fitz to give the okay to go to war with West Angola.

Mellie struggles with the death of her son, Jerry. She finally comes in terms with her loss after finding out that Jerry was murdered due to being deliberately exposed to bacterial meningitis rather than contracting the disease naturally, and she chooses to form an alliance with Elizabeth North. Later, after having an affair with him, Mellie discovers the true nature of Nichols, who threatens to tell the press.

Cyrus starts sleeping with Michael, a male prostitute, who is in the pay of Elizabeth. After finding out that Michael has been leaking information from Cyrus to Elizabeth, Cyrus calls Olivia for help. When pictures of Cyrus and Michael are leaked, the couple come up with a plan to get married as a way of handling the crisis.

While Olivia is being held captive, the team that Nichols hired has an internal issue leading to their ringleader getting killed by Gus, one of his employees. Gus then opens a black-market auction for Olivia, and terrorists as well as foreign nationals start to bid for her. Olivia manipulates the auction to gain the upper hand over the kidnappers, but is unable to stop the auction and is sold to Russia. Stephen Finch, a former Pope & Associates "gladiator" gone for three seasons, returns to rescue Olivia in Russia, where she is safely brought back to America. Shortly after, Nichols suffers a massive stroke, believed to be caused by a collaborative effort between Mellie and Elizabeth. Olivia is visited by Fitz, but reveals her disgust in his decision to go to war to bring her back and drives him away.

"Randy, Red, Superfreak and Julia" September 25, 2014
Directed by: Tom Verica - Written by: Shonda Rhimes
After two months of living on an island off the coast of Zanzibar with Jake, Olivia comes back to Washington D.C. after learning about Harrison's death, for whom she tries to plan the funeral.
02 | 49

"The State of the Union" October 2, 2014
Directed by: Allison Liddi-Brown - Written by: Heather Mitchell
In order for Fitz to make the biggest impact with his State of the Union address on gun control, Cyrus sets out to recruit a power couple who are influential on the issue. Meanwhile, Mellie’s personal struggle gets national attention.
03 | 50

"Inside the Bubble" October 9, 2014
Directed by: Randy Zisk - Written by: Matt Byrne
An old friend (guest star Sonya Walger) returns for help after her daughter goes missing, Cyrus has an awkward run in during a business breakfast, and Jake uses his connections to get some answers.
04 | 51

"Like Father, Like Daughter" October 16, 2014
Directed by: Paul McCrane - Written by: Mark Fish
Fitz asks Olivia to shut down a situation that could destroy the Grant family's reputation. Meanwhile, Rowan calls on an old friend to do his dirty work.
05 | 52

"The Key" October 23, 2014
Directed by: Paul McCrane - Written by: Chris Van Dusen
Olivia and the team continue to investigate Catherine's case, but Olivia is distracted when Jake stops returning her calls.
06 | 53

"An Innocent Man" October 30, 2014
Directed by: Jeannot Szwarc - Written by: Zahir McGhee
Olivia is summoned by a convicted assassin who claims he was wrongly accused, and Mellie becomes intrigued by a former first lady whose stories seem to be strikingly similar to her own.
07 | 54

"Baby Made a Mess" November 6, 2014
Directed by: Oliver Bokelberg - Written by: Jenna Bans
Olivia, still unable to believe that Jake is guilty, sets her eyes on Tom for additional information, and when Leo Bergen's newest client causes a gut wrenching reaction, her associates spring into action.
08 | 55

"The Last Supper" November 6, 2014
Directed by: Julie Anne Robinson - Written by: Allan Heinberg
Fitz and Jake continue to fight over Olivia, but Olivia needs them to focus on the real prize, taking down Command. Meanwhile, Huck longs to connect with his family and Quinn continues tracking Kubiak. Back at the White House, Cyrus' exploits finally catch up to him, but Elizabeth North's plan is much bigger than anyone ever expected.
09 | 56

"Where the Sun Don't Shine" November 20, 2014
Directed by: Tony Goldwyn - Written by: Mark Wilding
Command is always two steps ahead and everyone in Olivia’s life is in danger. Meanwhile, Cyrus is forced to face the consequences of his behaviour, and Huck and Quinn finally figure out just what Elizabeth North has been planning, but they might be too late to stop it.
10 | 57

"Run" January 29, 2015
Directed by: Tom Verica - Written by: Shonda Rhimes
The winter premiere picks up right where the finale left off, this time from Olivia's point of view. Exactly what happened when Jake went to the bedroom? Who took Olivia and where did she go? The fight of Olivia's life will begin.
11 | 58

"Where's the Black Lady?" February 5, 2015
Directed by: Debbie Allen - Written by: Raamla Mohamed
With Olivia still missing, the team comes together to do whatever it takes to find her and get her home safely.
12 | 59

"Gladiators Don’t Run" February 12, 2015
Directed by: Randy Zisk - Written by: Paul William Davies
As the gladiators watch from a far, countries around the world begin to bid on Olivia Pope. Meanwhile, Andrew and Fitz go toe to toe.
13 | 60

"No More Blood" February 19, 2015
Directed by: Randy Zisk - Written by: Heather Mitchell
Olivia remains one-step ahead of her captures, but she won't be able to keep it up for long. Jake, Huck and Quinn turn to an old friend for help and Fitz is pushed to the limit forcing Cyrus to take matters into his own hands.
14 | 61

"The Lawn Chair" March 5, 2015
Directed by: Tom Verica - Written by: Zahir McGhee
A tragedy in D.C. gains national attention and the White House must deal with their problematic Vice President!
15 | 62 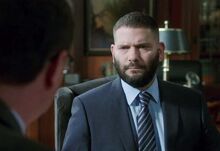 "The Testimony of Diego Muñoz" March 12, 2015
Directed by: Allison Liddi-Brown - Written by: Mark Fish
David Rosen is caught off guard when a surprise visitor reveals insider information about B613 that could take down the White House and destroy Pope & Associates.
16 | 63

"It's Good to Be Kink" March 19, 2015
Directed by: Paul McCrane - Written by: Matt Byrne
Olivia springs into action when she hears of a woman intending to expose sex secrets of some of DC’s most elite. Meanwhile, Elizabeth fears that Mellie’s sister could be detrimental to their political aspirations.
17 | 64

"Put a Ring On It" March 26, 2015
Directed by: Regina King - Written by: Chris Van Dusen
When Michael gets himself in a bad situation, the Gladiators launch into damage control and put pressure on Cyrus to move up the wedding. Meanwhile, David takes the first step in executing his plan to take down B613.
18 | 65

"I'm Just a Bill" April 16, 2015
Directed by: Debbie Allen - Written by: Raamla Mohamed
Taking down B613 becomes urgent when Rowan returns to town. Meanwhile, the mayor's wife is killed, and Olivia's asked to handle the fallout; and Fitz faces an uphill battle when he seeks the vice president's support in getting a crucial bill passed.
20 | 67

"First Lady Sings the Blues" April 23, 2015
Directed by: David Rodriguez - Written by: Paul William Davies
The team taking down B613 is in serious danger and forced to take drastic measures to ensure their safety. In the White House, Mellie is mortified when the nation turns against her and Cyrus is forced to come to her defense.
21 | 68

"A Few Good Women" May 7, 2015
Directed by: Olivier Bokelberg - Written by: Severiano Canales and Jess Brownell
Vice President Ross continues to defy the Grant administration when she hires Olivia Pope to defend a woman in the Navy. Meanwhile, Quinn and Huck must do what they do best to get answers about B613 and Mellie’s campaign for Senate continues to be a struggle.
22 | 69

"You Can't Take Command" May 14, 2015
Directed by: Tom Verica - Written by: Shonda Rhimes and Mark Wilding
Everything comes to a head in the shocking season finale when Olivia and the team finally make some big moves to take down Command, and Mellie’s fate is sealed as the election results are announced.

→ For more images from behind the scenes Season 4, see the Category: Season 4 Images page

Season Four Bloopers: To celebrate the release of 'Scandal: The Complete Fourth Season' on DVD, ET Online has your exclusive first look at the laugh-packed blooper reel.

Main article: 2015 An Evening With The Cast Of Scandal

On the Evening of May 14, 2105 after the Paley Center Panel in New York. The Scandal cast gathered at Twitter TV headquarters to live tweet the Season Four Finale "You Can't Take Command". All of the cast were in attendance and were live tweeting the whole episode. 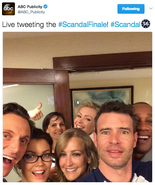 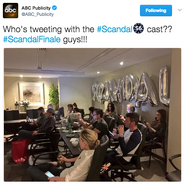 Behind the Scenes Photo 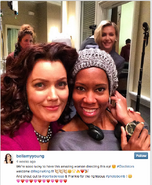 ("A Few Good Women")
Add a photo to this gallery 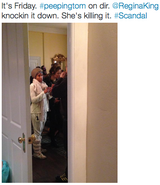 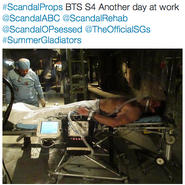 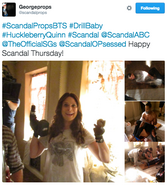 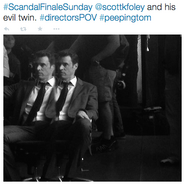 ("You Can't Take Command")
Add a photo to this gallery 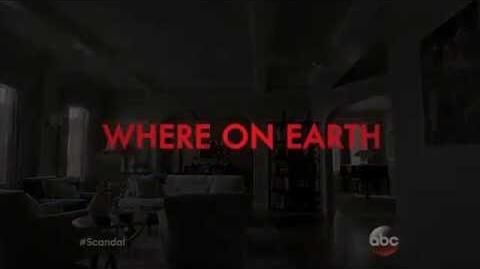 Retrieved from "https://scandal.fandom.com/wiki/Season_4?oldid=71917"
Community content is available under CC-BY-SA unless otherwise noted.