"White Hat's Back On"

The season continues the story of Olivia Pope's crisis management firm, Olivia Pope & Associates, and its staff, as well as staff at the White House in Washington, D.C. Season two has nine series regulars, all returning from the previous season, out of which seven are part of the original cast of eight regulars from the first season.

This season has shed light onto how Olivia and Fitz's romantic relationship started, why it stopped, when Mellie found out and why Olivia left The White House. There were six flashback episodes throughout the season that answered a lot of the unanswered questions from Season One. Last season ended with Olivia barely saving Fitz's presidency even though he wanted to just be a normal man with the woman he really loves, Olivia. Last season also brought up the question of who Quinn Perkins really is and how far Cyrus is willing to go to preserve Fitz's presidency. These questions have been addressed so far in this season.

The season opened three months after Quinn's arrest starting by answering the long awaited question... Who is Quinn Perkins??? -- Lindsay Dwyer. Lindsay Dwyer was the main suspect in a bombing that killed seven people California including her boyfriend. But how did Lindsay become Quinn and how did she get from California to DC? Well of course the country's finest fixer "fixed" that problem with the help from her trusty slick side-kick Huck. (White Hat's Off) But did Lindsay really blow up her boyfriend and six of his co-workers? That along with many more questions about this are answered throughout the course of the season.

So far this season has revealed how Fitz won his election; a group of conspirators - Hollis Doyle, Verna Thornton, Cyrus Beene, Mellie Grant and Olivia Pope - rigged the election polls in one county in Ohio, Defiance; no matter who the voters voted for, Grant/Langston won. Olivia finds romance in her ex-fiance Senator Edison Davis... he even proposes again, but Olivia turns him down when she realizes she wants difficult and crazy versus simple and easy. Abby Whelan takes up a relationship with Assistant US Attorney David Rosen but when he digs too deep into the Defiance conspiracy Olivia has Harrison Wright "take care of it!" Speaking of Harrison with Stephen gone he takes on a leader role amongst the associates. Quinn Perkins digs deep into her past and how she got her new life looking for questions and wanting answers from Olivia. Huck takes on a relationship with Becky Flynn, a former cocaine addict who turns out to be a former spy as well who set him up for the attempted assassination of the President.

"White Hat's Off" September 27, 2012
Directed by: Tom Verica - Written by: Jenna Bans
Quinn's true identity is revealed, finally! Mellie and Cyrus put Fitz in a compromising position during a live television interview with America's reporter, Kimberly Mitchell. Meanwhile, OPA takes a Congressman as a client who was caught with his pants down... literately!
02 | 09

"The Other Woman" October 4, 2012
Directed by: Stephen Cragg - Written by: Heather Mitchell
Olivia has to deal with the ramifications of Quinn's court case. In the White House, Cyrus and Fitz deal with a foreign policy emergency. Meanwhile, the country's most prominent minister is found dead in a hotel room handcuffed to a bed with his mistress; the team is sent to handle damage control.
03 | 10

"Hunting Season" October 18, 2012
Directed by: Ron Underwood - Written by: Matt Byrne
A paranoid government official drops a bombshell on Pope & Associates and even Olivia is caught off-guard with how high up this Scandal goes. Back at the office, unresolved questions about Quinn’s background create tension amongst the associates. Meanwhile, despite Cyrus’ best efforts to keep a lovesick President under control, things still manage to heat up between Fitz and Olivia when Olivia’s old flame returns.
04 | 11

"Beltway Unbuckled" October 25, 2012
Directed by: Mark Tinker - Written by: Mark Fish
A DC college student goes missing and her grieving parents come to Pope & Associates for help. Meanwhile David is still investigating the Cytron case and gets help from a very surprising source; and in the White House, Fitz feels the pressure as Mellie proves once again that she’s a political powerhouse.
05 | 12

"All Roads Lead to Fitz" November 8, 2012
Directed by: Steve Robin - Written by: Raamla Mohamed
A governor takes the law into his own hands when he sees his wife being raped and then he asks Olivia and her team to come in and clean up his mess. Meanwhile, both Cyrus and the President are caught off-guard when Cyrus' husband, James, decides to return to his career as a journalist covering the White House.
06 | 13

"Spies Like Us" November 15, 2012
Directed by: Bethany Rooney - Written by: Chris Van Dusen
Olivia receives an anonymous letter containing a coded warning which could expose Huck’s dark past. Meanwhile another Pope & Associates secret has already been exposed and Olivia asks Harrison to step up and handle it. And in the White House, Cyrus and Fitz are dealing with the ramifications of Cyrus' husband’s first front page news story.
07 | 14

"Defiance" November 29, 2012
Directed by: Tom Verica - Written by: Peter Noah
Harrison leads the team in managing a billionaire businessman who seems to have lost his sanity. Meanwhile, the White House celebrates the President’s 50th birthday, and James continues to investigate Cytron and discovers something that could change the fate of the country.
08 | 15

"Blown Away" December 13, 2012
Directed by: Jessica Yu - Written by: Mark Wilding
While working in the White House, Olivia helps Vice President Sally Langston; Cyrus stumbles across the truth about James’s secret investigation; and one of Olivia’s associates struggles to come to terms with a shocking betrayal.
10 | 17

"One For the Dog" January 10, 2013
Directed by: Steve Robin - Written by: Heather Mitchell
Olivia gets news from Edison that the President is awake; Mellie forged Fitz's name in a letter of reinstatement. When Olivia and Cyrus find out they try to figure out how to control the situation. Olivia has her associates aide with the control. Meanwhile, Sally Langston and Hollis Doyle try to find a way to keep her in office. Olivia pushes Edison away.
11 | 18

"A Criminal, A Whore, An Idiot, and A Liar" January 17, 2012
Directed by: Stephen Cragg - Written by: Mark Fish
The White Hous is rocked by more changes as Fitz returns to office; flashbacks reveal more about the rigging election conspiracy and how it started. Edison makes a shocking accusation. Fitz makes a surprising decision about his future with Mellie as does Edison with Olivia.
12 | 19

"Truth or Consequences" January 31, 2012
Directed by: Jeannot Szwarc - Written by: Peter Noah
After discovering the truth about the rigged White House election, the “Gladiators in Suits” realize that a quickly unraveling Olivia may not always wear the white hat. Meanwhile, Mellie is forced to take extreme measures to try and reel Fitz in.
13 | 20

"Nobody Likes Babies" February 7, 2013
Directed by: Tom Verica - Written by: Mark Wilding
As David uncovers the truth about the Cytron case, things come to a head for Olivia, Cyrus, Mellie, Hollis and Verna. Backed into a corner, the five conspirators go to extremes and, in some cases, unconscionable lengths to protect themselves and/or the ones they love.
14 | 21

"Whiskey Tango Foxtrot" February 14, 2013
Directed by: Mark Tinker - Written by: Matt Byrne
Ten months later... after discovering the truth behind defiance, Fitz is still struggling to figure out whom he can actually trust. Meanwhile Olivia is trying to move on with her life, and she meets a handsome stranger, Jake Ballard, who sparks her interest. But when Fitz and Olivia are forced to be in the same room again, real sparks fly and things get heated. Back at Pope & Associates, the team handles a new case, and for the first time they’re working with David Rosen instead of against him.
15 | 22

"Boom Goes the Dynamite" February 21, 2013
Directed by: Randy Zisk - Written by: Jenna Bans
Olivia and the team end up acting as high-powered matchmakers for Peter Caldwell, an up-and-coming politician; David turns to Pope & Associates when he thinks he is being followed; Fitz is faced with a delicate hostage situation along with who he can trust. Meanwhile, Cyrus tries to find ways to make it back into Fitz's good graces, except Mellie is thwarting his every attempt, unknowingly to Cyrus.
16 | 23

"Top of the Hour" March 21, 2013
Directed by: Steve Robin - Written by: Heather Mitchell
Olivia finds herself in the middle of a media storm, but this time she's on the opposing side of the oval office when Fitz's pick for Supreme Court Justice is caught in a torrid affair with Liv's new client, high-powered CEO Sarah Stanner (guest star, Lisa Edelstein). Meanwhile, Olivia and Jake continue their flirtatious relationship, while Huck takes Quinn under his wing and Harrison and Abby try to figure out where they stand with their friendship. Back in the White House, Cyrus and Mellie continue to fight for Fitz's attention, but someone else may already have it.
17 | 24

"Snake in the Garden" March 28, 2013
Directed by: Ron Underwood - Written by: Raamla Mohamed
The team find themselves working for the devil when Hollis Doyle’s daughter is kidnapped and held for ransom. Meanwhile, David is still in danger and is forced to seek shelter at Pope & Associates; Olivia and Jake take their flirtatious relationship to the next level even as the President continues to rely on Jake for intel; in the White House, Cyrus will stop at nothing to get back into the President’s good graces; and Mellie’s claws come out when she tells Fitz he needs to make some changes.
18 | 25

"Molly, You in Danger, Girl" April 4, 2013
Directed by: Tom Verica - Written by: Chris Van Dusen
When details from an old case don’t add up, Olivia’s team must backtrack to figure out if they made a mistake. Worse still, this mistake has potentially put them all in serious danger. Meanwhile, Olivia and Jake’s relationship starts to heat up, while at the White House Fitz and Mellie’s relationship hits a new low.
19 | 26

"Seven Fifty-Two" April 25, 2013
Directed by: Allison Liddi-Brown - Written by: Mark Fish
Secrets from Huck’s life before Pope and Associates are revealed, Olivia and Fitz engage in an emotionally charged conversation, unaware of the fact that someone could be watching, and Olivia’s team comes together to help one of their own. Meanwhile, Cyrus is becoming increasingly skeptical of Jake, and Mellie makes a decision that could bring down the White House.
20 | 27

"A Woman Scorned" May 2, 2013
Directed by: Tony Goldwyn - Written by: Zahir McGhee
The team continue their investigation into the mole and make a shocking discovery in the process. Meanwhile Fitz orders Jake to continue to protect Olivia, who is still very much in danger, and back at the White House Mellie’s ultimatum forces Cyrus into the role of “fixer".
21 | 28

"Any Questions?" May 9, 2013
Directed by: Mark Tinker - Written by: Matt Byrne
The White House is in the middle of its biggest scandal to date and Cyrus is in the eye of the storm. Meanwhile, someone close to Olivia betrays her and the team.
22 | 29

"White Hat's Back On" May 16, 2013
Directed by: Tom Verica - Written by: Shonda Rhimes
With the identity of the mole now closer than ever, Olivia and her team are in very real danger. Meanwhile, the latest White House scandal pushes Cyrus to his limits.

In celebration of the Season 2 finale of Scandal, Kerry Washington and the entire cast performed a live table read of the season-ending episode, “White Hat’s Back On” at the Academy of Television Arts & Sciences in North Hollywood, California. 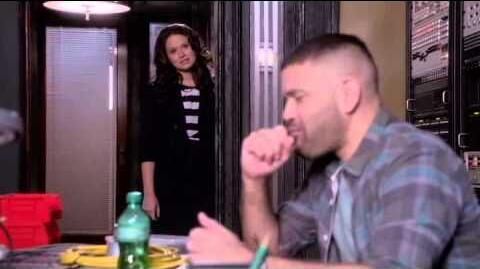 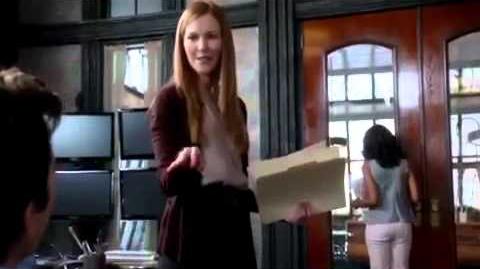 Retrieved from "https://scandal.fandom.com/wiki/Season_2?oldid=71915"
Community content is available under CC-BY-SA unless otherwise noted.