"They All Bow Down"

Samantha Ruland (real name Gertrude) was hired by Luna Vargas along with Theodore Peus and Meg during the Presidential Election of 2018 to make sure that Frankie Vargas didn't win the election.

The character of Samantha Ruland was a recurring character in the sixth season of Scandal, portrayed by Zoe Perry.

Samantha worked with Theodore Peus to make sure that Mellie won the Presidential election and becomes President. She also approached Meg to kill Jennifer and Huck.

It was later revealed that she and Peus were hired by Luna Vargas to make sure that Francisco Vargas did not win the Presidential Election 2018 and to ensure that Mellie Grant was going to be the first Female President of the United States. She was also ordered to blackmail Rowan, to assassinate Francisco Vargas, and kill Elizabeth North.

Rowan stabbed her with the Dinosaur tooth in the stomach. Shortly after he killed Samantha, Rowan cut her head off and put it in a box. He then gave the head and the box to David Rosen, so he could find out who hired her. Jake, David, and Abby later found out her real identity and from whom she and Peus were taking orders. 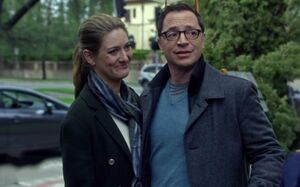 When Abby went to David's house to get his help with her "Peus" situation, she ran into Samantha. Samantha told her that they had thought of everything, she wasn't going to let Abby use David for help and get her way. When Olivia Pope & Associates and Jake Ballard found out about Samantha and Theodore, Jake went to warn David. After killing her, Rowan gave David Samantha's head to find out about her real true identity. He brought it to Abby's home and they called Jake to find the real information about her. 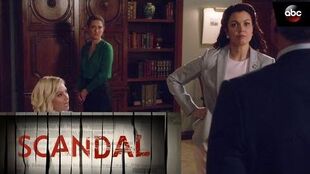 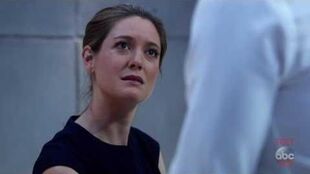 Retrieved from "https://scandal.fandom.com/wiki/Samantha_Ruland?oldid=71401"
Community content is available under CC-BY-SA unless otherwise noted.