Sally Langston was initially a senator from Georgia. She later ran for president in the primaries and eventually lost to Fitz Grant, though she was offered the Vice President position and she accepted, tapping Billy Chambers as her Chief of Staff.

When Fitz got shot at his birthday party, Sally was sworn in as Acting President, becoming the first women to assume the role as President of the United States, while he recovered.

After her second loss, Sally hosts her own political talk show, called "The Liberty Report".

Sally was a Senator from Georgia before running for President in the Republican Primaries. She won the Iowa Caucuses and the New Hampshire Primary and was considered the front runner for the nomination before losing heavily on Super Tuesday to Fitz. She ended her campaign for presidency after he offered her to his running mate as his VP, instead. (The Trail)

As a part of Sally coming on as Fitz's VP he promises her the chance to nominate a the first supreme court justice, as soon as one becomes vacant. She wanted this position to go to Bradley Hargrove but, after the conspirators - Cyrus & Olivia revealed his juvenile record, the seat was given to Verna Thornton instead. (Happy Birthday, Mr. President)

Sally is reluctant to give her support to the president - after the Amanda Tanner scandal is "outed" - due to her moral beliefs. Her attitude changes the moment the president hands her a file Olivia had given him earlier containing proof that Sally's daughter had a secret abortion as a teen and she is quick to throw her former Chief of Staff, Billy Chambers, under the bus. (Grant: For the People)

After President Fitzgerald Grant is shot and confined in a critical state at the hospital, Sally Langston enacts the 25th Amendment and becomes the first female President of the United States. She fires Cyrus Beene and enlists the help of Hollis Doyle in order to keep her seat as President even if Fitz woke up. (Happy Birthday, Mr. President)

While president Hollis gave Sally information about Verna Thornton, information she could use to finally get the seat she was suppose to have on the supreme court. Sally threatened Verna that she would reveal to one of Verna's liberal news outlets that she was dying of terminal cancer if she did not give up her seat on the bench. But to keep her seat Verna turns in the name of the man who shot the president... Huck, betraying Olivia in the process! (Blown Away)

Sally is asked to resign by the president when he hands in a letter or reinstatement to her and President Pro Tempe Edison Davis. But did Fitz really sign that letter and send it to the Sally??? Hell no...it was Mellie! Olivia and her team of gladiators help out with this scandal without asking any questions. Sally and Hollis don't believe that Fitz is really awake or that he signed that letter. Olivia and Cyrus managed to keep everyone out of his hospital room and make it look like everything is returning to normal. That is until Sally shows Mellie that she can prove that she forged his signature. (One For the Dog)

Fitz is awake for real, but Sally doesn't think that he's ready to come back to full duty as president. She's still trying to hold onto her seat as President. But once Fitz proves to her, along with the administration and Olivia that he is ready to come back to office, Sally realizes that she has no choice to resign as President and return to her role as Vice President upon his return. (A Criminal, A Whore, An Idiot, and A Liar)

Sally threatens to leave Fitz when their reelection comes up. She feels that her constituents deserve a candidate that hasn't lied, betrayed them, or ever cheated on their spouse. But Fitz reminds her that the best way for her to get elected as President after his second term is with his support and backing.  (Any Questions?)

Sally finally realizes that she must stand behind her president no matter how immoral he's been; and it gets worse especially when the moles true identity is revealed, being Sally's former Chief of Staff. (White Hat's Back On)

Despite Fitz' urging, Sally decides that she will run for president, but after being advised against a Republican primary campaign, she decides to run as an independent. She is planning on resigning as vice president to run for president. (More Cattle, Less Bull)

Sally also is known to only a few people to have killed her husband Daniel Douglas Langston after finding out that he slept with him. (YOLO / A Door Marked Exit)

After Sally kills her husband, she calls Cyrus Beene. Cyrus helps cover up Daniel Douglas’s death by using Charlie, who also brings Quinn. Mellie tries to use Daniel Douglas’s death to blackmail Sally into dropping her bid for the presidency, but Sally decides to continue running anyway. (A Door Marked Exit) 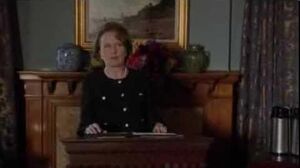 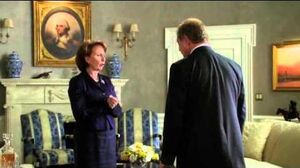 Sally Langston: "Matthew 13:24, there is a parable about a group of enemies that plant bad seeds among the good ones to ruin the crops. The farmer notices weeds growing amongst the fruit. The servants asked the farmer if they should round up the weeds before the harvest and what does the farmer say?"
Billy Chambers: "No, let them grow together."
Sally Langston: "One day, God will burn the weeds and save the fruit, Billy, but for now: let them grow." (The Trail)

Retrieved from "https://scandal.fandom.com/wiki/Sally_Langston?oldid=70930"
Community content is available under CC-BY-SA unless otherwise noted.