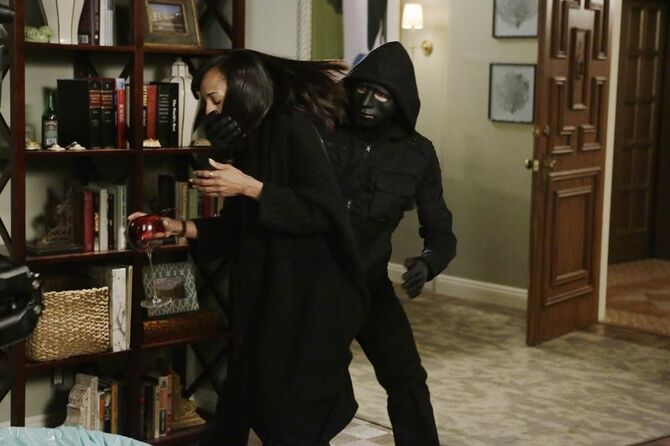 Run is the tenth episode and mid-season premiere of the fourth season of Scandal, and is the fifty-seventh overall.

The winter premiere picks up right where the finale left off, this time from Olivia's point of view. Exactly what happened when Jake went to the bedroom? Who took Olivia and where did she go? The fight of Olivia's life will begin.

When we last saw Olivia Pope, she was dancing to Stevie Wonder and contemplating sex on a piano. Jake is willing to join her for both activities. He needs blankets for the latter. Pianos tend to be cold. Slippery. As Jake retreats to the bedroom, Olivia is grabbed by a masked intruder. Wine spills on the sofa. Jake immediately realizes something is wrong. He races to the street where he catches the license plate of a car as it speeds off into the night. Jake calls Huck with this lead. Quinn thinks she ran off to another island. Jake has no idea this was all a setup. Olivia is still inside the building.

The peephole in the apartment across from Olivia’s place provides the perfect view to Jake’s every move. A team of masked kidnappers has surveillance equipment set up. They break down all cameras that were hidden in Olivia’s place while Jake is in the street. Olivia struggles to scream through the duct tape on her mouth. She manages to slip off her ring and lodge it under a rug. Her neighbor, Lois, believes everything will be fine now that Jake is heading out of the building. Olivia knows this isn’t true as her abductors remove their masks. THWAP! Lois is shot in the heart by a kidnapper. Olivia can only helplessly watch as her neighbor bleeds out.

Olivia’s abductors sneak her away in an ambulance along with the body of her neighbor. She knows that none of the men before her are in charge. She’s knocked unconscious with an injection. Olivia awakens in a barren room. Someone else is there. His name is Ian McCloud. He’s a despondent journalist. He’s glad that Olivia also heard the Islamic call to prayer, as he sometimes hallucinates.

Olivia notices a big, red door while being escorted to and from the bathroom. She’s trying to figure out a way through it. Ian is too afraid to help. He speaks of another prisoner named Bradley. His people paid a ransom, but Ian believes they shot him anyway. He believes there’s no way they are ever going home. Olivia does her best to convince him that he needs to live to see his daughter’s 7th birthday. She promises that she’s going to save them. After all, she’s Olivia Pope. If she’s missing, the President of the United States is looking for her. He won’t stop until she’s found.

Olivia continues to make the most of her five-minute bathroom breaks to formulate plans to escape. She’s caught in the act of trying to unlock a window. She gets into a fight with one of her abductors. The guy wants to shoot her. A second abductor convinces him that they can’t. Still, she needs to be punished. They can’t kill her, but her cellmate is fair game. Olivia tries to fight them as they drag Ian out of the room. She hears him pleading for his life. Then… BANG! BANG! A thud is heard. Olivia is horrified. One of her captors returns to assure her that there’s no way out.

Gunshots are heard outside Olivia’s cell. Commando soldiers storm in. Jake leads them. He carries Olivia out of the cell. She pleads with him to not let go. He won’t. FLASH! Olivia awakes in a big bed on a bright, sunny day. She hops into the shower. She’s joined by the mayor of the small, Vermont town where she makes jam. Yes, she’s joined by Fitz. While out on a walk with her dog, Abby pops by to let her know that no man is going to rescue her. She’s the only gladiator around. She must rescue herself. Abby tells Olivia she dropped some sort of fixture on the ground. Secret Service/B613 man Tom echoes her abductors words that there’s “no way out.” FLASH! Olivia is back in her cell. Jake, Fitz, Abby & Tom... they were all hallucinations. She's still trapped in a mysterious cell.

Olivia looks to make use of the wiring in her bra to escape during a bathroom run. Instead, she breaks down, sobbing uncontrollably. She crumbles to the ground. While there, she sees the fixture Abby pointed out to her during her Vermont vision. It fastens the pipe to the underbelly of the sink. Olivia’s abductor (Gus) opens the door when she indicates she’s done. THWACK! Olivia knocks him unconscious with the pipe she unfastened. She grabs her abductor’s keys and gun. She makes a break for the big, red door.

Olivia’s other abductor steps into her path. He believes that if she was going to shoot him, she would have done so already. Olivia mutters to herself. She’s saying, “Heart… Hips… Head.” BANG! She opts for “head.” Olivia shoots her abductor dead. She frantically works all the keys on the chain to finally open the big, red door. Once she escapes through it, she realizes she’s not in a far off country. She’s on a makeshift soundstage. Olivia has been duped by her mastermind abductor. It’s someone she got to know well in her cell.

Ian steps out of the shadows. He explains how he played Olivia. He needed to extract information. Ian believes the knowledge that the president will never stop looking for her is helpful. He leads Olivia out of the room back through the big, red door. Ian says they have a lot of work to do. This is just the beginning.

→ See and enjoy 42 pictures from Run at Images from Run.

Retrieved from "https://scandal.fandom.com/wiki/Run?oldid=68729"
Community content is available under CC-BY-SA unless otherwise noted.