View source
watch 01:28
Who is Quinn Perkins?
Do you like this video?
Play Sound

Quinn Perkins, born Lindsay Dwyer, is currently the head of Olivia Pope & Associates, which is renamed to QPA (Quinn Perkins & Associates), after Olivia gave the firm to her. Before becoming the head, she worked as an associate at the firm. She also worked at B613 as a junior operative for a short time. She is married to Charlie, with whom she has a daughter named Robin.

As Lindsay Dwyer, she lived in San Jose, California and graduated from Stanford Law School. She passed the California State Bar the day before the presidential election. Her boyfriend Jesse Tyler worked for Cytron and helped rig the presidential election. He was murdered, along with 6 other co-workers in an explosion. Lindsay/Quinn was framed for the murder and before she was turned over to the police, Huck kidnapped her as a favor for Olivia, drugged her and brought her to DC. Quinn woke up with a new identity and ran with it. (White Hat's Off / Truth or Consequences)

She joined a law firm in D.C. called O'Malley & Lee under her assumed identity. She was then hired by Olivia Pope & Associates, not knowing that Olivia and Huck were responsible for her new identity. (Sweet Baby)

After her boyfriend Gideon Wallace was murdered the OPA team "cleaned-up" the crime scene to wipe any trace of Quinn Perkins considering that wasn't her real identity. But her identity was eventually discovered by David Rosen, however he ran her prints himself and handed her over to Olivia before outing her real identity. (Grant: For the People)

After spending six months in jail, awaiting trial, she was prosecuted in federal court for the Cytron explosion. David Rosen prosecuted the case and asked for the death penalty. When the case looked like it was going to be lost, Olivia contacted Supreme Court Justice Verna Thornton who in turn was able to get the judge to enter a judgment of acquittal for Lindsay before the jury deliberated. (White Hat's Off)

Months later Quinn has advanced at OPA. She begins to train with Huck in helping with clean up, trailing people, hacking on the computer. She became known as "Baby Huck." (Whiskey Tango Foxtrot)

When the team needs to find the Cytron card - yet again - Huck and Quinn wait at Billy Chambers' apartment for him to get home. Huck was hoping to not have to use violence, but when Billy wouldn't give up the location of the card out comes Huck's trusty torture screwdriver, except this time he couldn't do it. So Quinn jumps in to help her partner out and tortures Billy for the information. Leaving her with an adrenaline high. (White Hat's Back On)

After being distanced from Huck after spying on him at an A.A. meeting Quinn tries to find her own adventurous avenues to get that adrenaline high she so much longs for. When handling the Josie Marcus case in Montana Quinn buys a gun and mails it to herself at the OPA office, unbeknownst to everyone else. When she began using it at the target range she ran into an old foe, Charlie. He helped her to hit the targets bullseye, thus beginning a romantic connection as well as professional relationship with each other. (More Cattle, Less Bull / Icarus)

Quinn thirsty for that bloodlust follows Charlie to one of his latest B-613 assignments, willing to help out she ends up getting setup for murder again.B ut, to rescue her, Charlie tells her that she now belongs to B-613, "welcome to wonderland." The OPA team is on the hunt for the man Quinn murdered - not knowing she murdered him. While searching through security footage Huck reports to the team that he couldn't get anything off the feed. But later that night when Quinn gets home she finds a picture of herself at the location where the security guard was murdered. Huck knows! She sees Huck in her living room with all of his murderous tools out, organized and ready to torture. Huck starts to torture her by pulling out her teeth until he receives a phone call from Olivia stating she needs her help. Huck leaves Quinn tied up in all the duck tape. Then Charlie comes to save and they share a kiss. (Everything's Coming Up Mellie / Vermont is for Lovers, Too)

Huck was asked by Olivia Pope to save Lindsay's life after the Cytron bombing. He drugged her and moved her to DC giving her a new identity. He is now training her how to be a good spy-like investigator. Huck has become somewhat of a mentor to Quinn. While Olivia leaves for a month on an island Huck and Quinn have a very brief relationship.

Jesse Tyler was Quinn's boyfriend back when she went by the name Lindsay Dwyer; they lived in Northern California. Quinn/Lindsay lost Jesse when he - along with six co-workers - were blown up in his office for wanting more money from Hollis Doyle. Quinn/Lindsay was framed for the explosion.

Quinn dated Gideon in the first season; after he was murdered she was accused of his murder as well, but never prosecuted for it.

Quinn started a professional relationship with Charlie when he framed her to kill a security guard. The trust began when she was at the gun range, Charlie offered her some help, at first she was reluctant to take it but then after many failures of hitting her target she welcomed Charlie's advice. Not too long after that, she started tailing him to see what kind of covert mission he was on. After he tricked her into killing the security guard she became B613 property. Their romantic relationship began at some point, and continues even though they are now also colleagues. Charlie proposes to her while working on a case and they are due to get married soon. They are also expecting their first child together. (Icarus, Everything's Coming Up Mellie, Vermont is for Lovers, Too, YOLO & A Door Marked Exit, Tick Tock)

→ See and enjoy 407 pictures of Quinn at Images of Quinn. 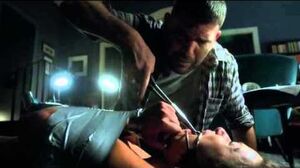 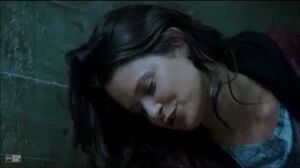