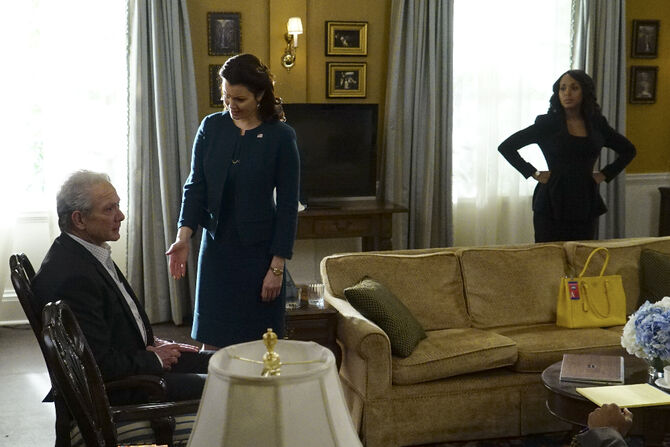 Mercy is the twelth episode of the sixth season of Scandal, and is the hundred-and-second overall.

Just when Peus’ iron grip seems inescapable to Olivia and everyone she holds dear, a shocking threat to the White House turns everything on its head.

Olivia wakes up at the White House next to Fitz and then checks on her father who is being kept there in a secret chamber. Frustrated by his confinement, Eli asks to be sent to another country where he'll be safe, but is shut down by both Liv and the president.

Meanwhile Abby has a flashback to the recent events with Peus. She's agitated by Peus' control's over the White House and so are the gladiators. 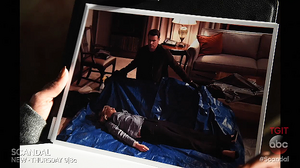 In a remote location in the woods, Jake and David discuss Elizabeth's murder and David is given the responsibility of keeping track of Ms. Ruland, Peus' partner, who he's dating. Mr. Peus shows up at Olivia's office to demand that she make Jake resign from the vice presidency role -- so he can take Jake's place. Liv tells Peus, "no," but later tells Jake to step down for his safety. After going back and forth, Jake agrees and makes a public announcement that he's resigning. After Jake's announcement, Ruland prepares to announce Mr. Peus as VP nominee. Unfortunately, on their way to the press room, the Secret Service locks down the White House because of a suspicious drone overhead. Ruland is taken into a holding room with Abby where they are stuck in a dead zone. Meanwhile, the president, Mellie and the gladiators, who are controlling the drone remotely, are brought to an open office where they meet to devise a plan to get Mellie back in control of her presidency. 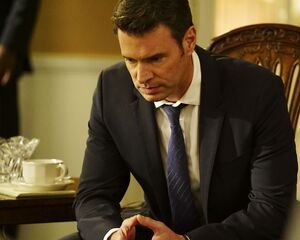 During this time, Eli is called in to help figure out a plan. Instead of helping, Eli causes contention by taking shots at Fitz for being weak. Eli then tells everyone to accept that they have failed against Peus. As everyone takes a break, Cyrus brings Eli to a private cellar where they drink wine. Cyrus at first attempts to connect with Eli, but then tries to kill him because he is still upset that Eli killed Frankie Vargas. Eli blocks Cyrus' attempt and the two separate. Meanwhile, Jake feels they all should just fight back against Peus, but Liv tells Jake they must first protect Mellie. Marcus, on the other hand, offers encouraging words to Mellie to not to give up. This prompts Mellie to change her mind and to fight back by choosing another vice president: Frankie Vargas' wife. In the last few minutes, Mellie announces her new vice president and Liv finally stands up to Ms. Ruland by having her arrested by the Secret Service. 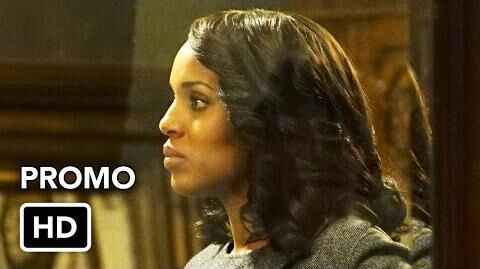 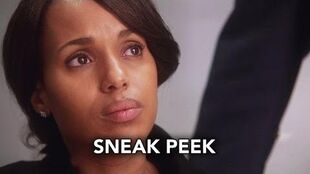 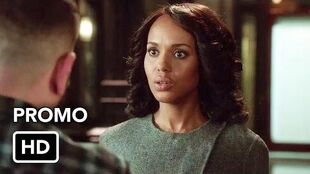 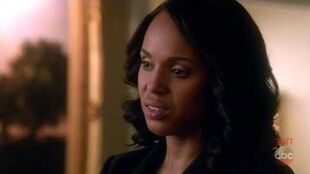 Olivia and Jake Scandal 6x12 "What are you fighing for?" 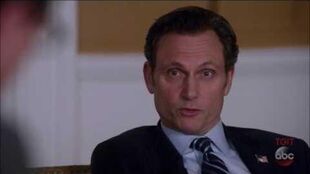 "If she loves you, she can be any kind of tornado she wants."
Add a photo to this gallery

Retrieved from "https://scandal.fandom.com/wiki/Mercy?oldid=68782"
Community content is available under CC-BY-SA unless otherwise noted.