View source
watch 01:38
Who is Mellie Grant?
Do you like this video?
Play Sound

Melody Grant seemed like she had it all. The grand White House, beautiful children, and the most powerful husband in the world. But Mellie was never meant to be anyone's trophy wife. As pieces of her perfect life began to fall away, Mellie became even more fierce and ready to fight for what she deserves. Not satisfied with picking out china patterns, she's got her eye on the real prize—becoming the first elected woman President of the United States.[1]

Mellie Grant was a lawyer, graduating top at her class at Harvard and was so until the birth of her eldest son, Jerry. Throughout much of her marriage to Fitz, she provided political advice that indeed stemmed off her dream of becoming a political figurehead.

When Vice President Andrew Nichols became incapacitated, and United States Senator Susan Ross becomes the Vice President, she ran and ultimately won the junior Senate post, famously filibustering for women’s rights, giving her much needed political spotlight and was the First Lady of the United States until she divorced her husband. Indeed, her relationship with former husband, Fitz Grant, is constantly tested due to his infidelity and her betrayal of his trust on various different occasions throughout the so-called “partnership of a marriage”. Despite this however, they offer each other much needed council on affairs that they’ve faced throughout the series.

In the 2018 Primary for the Republican Nomination for President of the United States, recently divorced Mellie enlists political operative and her husband's former mistress Olivia Pope to help run her campaign for the nomination. When incumbent Vice President Susan Ross and Businessman Hollis Doyle drop out of the race due to the political workings of Olivia and White House Chief of Staff Abby Wheelan, Mellie becomes the Presumptive nominee of the Republican primary, she was then nominated at the 2018 Republican Convention with her Vice Presidential candidate Jake Ballard.

After the assassination of the President-Elect Francisco Vargas and the arrest of his running mate, and former ally of Mellie, Cyrus Beene. She was presumed to win the Electoral College vote. However days before the vote, Cyrus has been exonerated and cleared of all charges. Foreshadowed throughout, former White House Chief of Staff Elizabeth North uses the help of Peus and his associate to blackmail electors officially appoint Mellie as the 45th President of the United States of America and to drop Jake Ballard as Vice President on the ticket. Inaugurated and merely being assassinated by now deceased Vice President, Luna Vargas.

She is now the 45th President of the United States of America. Olivia Pope was her Chief of Staff until her resignation. The role is was filled by the former NSA Director Jake Ballard but since his arrest, the holder is unknown.

Mellie has always had extraordinary intellect and has always been an eloquent woman, knowing that despite what happens, there is a bigger end goal to work towards. She is known to confide her feelings into her passion of policy and is indeed credited for being a strong woman, dealing with 8 years of infidelity and later revealed, raped by her father-in-law, so she could one day effect real change.

Fitz and Mellie were introduced to each other by Fitz's father, Jerry Grant. Jerry initiated a political marriage between Fitz and Mellie because he appreciated Mellie's "old money blood". Mellie confesses that she and Fitz were never in love, but were always partners. ("Molly, You in Danger, Girl / The Other Woman")

During the election, Fitz and Mellie are having trouble coming off as relatable to their constituents because their marriage is struggling. With Olivia Pope's intervention, they start to act more like a warm and loving couple; like the couple one would want to invite into their house. This gathers Fitz more votes. Mellie is shown to be very loyal to her husband's campaign at this time, going through great lengths to ensure that he is elected. She fakes a miscarriage on national television to garner sympathy from female voters. ("The Trail")

During Fitz's Presidency, Mellie becomes increasingly impatient with Fitz for various different reasons. She is annoyed at his lack of decisive leadership and attempts to make a few major decisions of her own. She is extremely annoyed when she finds out about Fitz's affair and possible pregnancy with Amanda Tanner. Yet she still remains loyal to Fitz and devises a plan to protect his presidency and consequently, her First Lady status. ("Grant: For the People")

After the affair with Amanda Tanner, Mellie is no longer accepting of Fitz and Olivia's relationship. She grows angry every time she finds out that Fitz has seen Olivia. Eventually she becomes so angry that she demands that Fitz sleep in another bedroom because she doesn't want to sleep with a man whose dreams of Olivia Pope causes him to have an erection every night. ("Hunting Season "/ "Beltway Unbuckled")

Mellie first admits that she knows about Olivia and Fitz's affair after Fitz takes Olivia to view the The Constitution of the United States. The trip is traditionally taken with the future president and his first lady, so Mellie deduces that Olivia's presence with Fitz there meant that Olivia was romantically involved with him. ("Happy Birthday, Mr. President")

Mellie notices that Fitz has been hostile to those around him including his children after he discovers Olivia is not the woman he thought she was. So Mellie attempts to get back on his "good side". She then gives an explosive speech to Fitz after Fitz ranted about her lack of mothering skills. She tells Fitz the truth, that their children did not want to come home because Fitz had become an angry, bitter, man who was constantly drinking. ("Snake in the Garden")

Fitz and Mellie eventually divorced. Since then, however, their relationship has become more cordial.

Marcus disliked Mellie at first because he thinks she is mean, privileged, annoying and whiny. When they got to work together, they eventually get along. While working together closely, they began to develop feelings for each other. They first tried to ignore the feelings they have for each other due to their work circumstances but it didn't work out and they started having a secret love affair. When Olivia found out about that, she decided to break them apart because there would be consequences if the public knew about the love affair. Olivia asked Abby as a favor to offer Marcus a job at the White House in order to break him up with Mellie. Marcus then got the Press Secretary job at the White House. When he got the job, Mellie accuses him of choosing it over her and that he only slept with her climb the ladder. But he told her he chose her and he would choose her, all she has to do is choose him.

Mellie developed personal feelings for Rashad while working together on Middle East peace. They got closer each day working together and a sexual tension started to rise. When Mellie showed concerns about him going back to Bashran while things there were chaotic, they finally kiss. However, Mellie stopped him and she arranged a plane for him to go back to his country, Bashran, as he wanted to. He promised her he would come back to the U.S. but he was killed in a plane explosion before he even made it back. (Adventures in Babysitting) 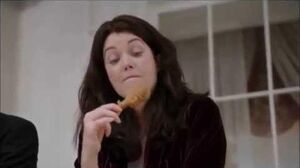 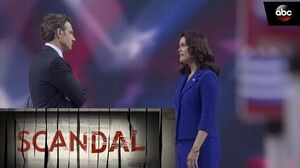