"Baby Made a Mess"

Leo Bergen is a crisis management consultant, second best to Olivia Pope. He worked for Sally Langston as her "Special Assistant" which is just a fancy way of saying that he was her campaign consultant and it gave him access to The White House.

Leo was originally sought out by Cyrus Beene and First Lady Mellie Grant to run Fitz's reelection campaign. But he turned them down because he doesn’t take on a candidate he knows will lose.

Desperate to get him back Cyrus seeks the aide of the vice president, Sally Langston to convince Leo that they're a winning ticket. However Sally has a different plan in mind. She confronts Leo in the men's room at The White House Correspondent’s dinner. She surprises Leo with hypothetical questions about running for president. Leo has his concerns about her running against a sitting president in her own party. But Sally tells him that she plans to run as a third party candidate, and Independent candidate. (More Cattle, Less Bull)

Leo meets with Vice President Sally Langston and her husband Daniel Douglas at their home in Georgetown. Sally and Leo begin to talk strategy and how to go about resigning as the sitting Vice President strategically and appropriately.

Leo comes up with the plan to spark some religious leaders to speak out against Fitz's indiscretions. Reverend Cole does so. Once Cyrus sees this he contacts Sally to speak with Reverend Cole. As Sally says, “Hook, line and sinker.” Basically Cyrus fell for the bait. The plan is to sit down with the good outspoken reverend and talk to him about endorsing Sally as a third party presidential candidate. But what Leo didn’t suspect is that Cyrus already suspected what Sally was up to, so Cyrus setup the TV interview Reverend Cole did in order to “hook, line and sinker” Sally to see if she was betraying them – Fitz, Mellie & Cyrus. This time around Leo's plan failed... for now! (Icarus)

When Leo finally finalized Sally's candidacy, Leo told her that she will betray the Christian conservatives that helped her by becoming pro-choice, telling her that it is the only way she will win. Leo convinced her. To his dismay however, after the death of Sally's husband, Daniel Douglas, Sally seemed skeptical about proceeding with her candidacy. During Sally's outburst, Leo realized that she had killed her husband and that she called the White House - more specifically Cyrus - for help. Leo told her that she should have called him. (A Door Marked Exit)

Several months after Fitz was reelected as President of the United States Leo returned to The White House after scandalous videos of Senator Lewis McDonnell were released to the press, which forced him to resign from his post as Senator of Virginia. In comes Leo to be the Campaign Manager for the President Grant's choice to fill the seat, none other than Charles Putney, who just so happens to be White House Press Secretary Abby Whelan's abusive ex-husband. Leo once again got the chance to go up against Olivia Pope who was managing Putney's oppenent, Susan Ross' campaign, and once again Leo lost!

After Leo learned what Charles Putney had done to his ex-wife he anonymously released some information to take down Putney to the press. He goes to the Press Corp room to celebrate his loss with Abby where the two have moment and later kissed. (Baby Made a Mess)

While being deposed by Attorney General David Rosen - Abby's ex-boyfriend - in regards to Cyrus' affair with a prostitute she must reveal that she spent the night with Leo to account for her whereabouts on a specific night in question. (Where the Sun Don't Shine)

Leo got closer with Abby when he came into the White House as the campaign manager of Charles Putney, the ex-husband of Abby. After Abby tells him about her and Charles’s relationship, Leo ruins Charles Putney's campaign by telling the press that Charles set up the sex video scandal, forcing him to withdraw his candidacy. This leads them to bond and eventually, they started dating. Later, it appeared that they live together and even though they have up and downs in their relationship, they still appear to be together. Their relationship is a bit complicated because of their work situations. 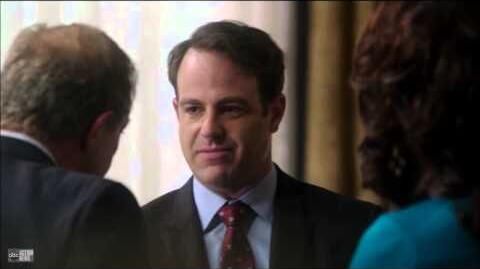 Retrieved from "https://scandal.fandom.com/wiki/Leo_Bergen?oldid=70938"
Community content is available under CC-BY-SA unless otherwise noted.