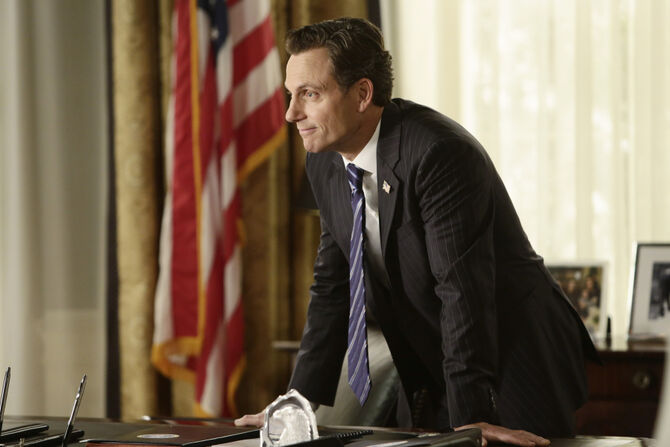 "I'm Just a Bill is nineteenth episode of the fourth season of Scandal, and is the sixty-sixth episode overall.

Taking down B613 becomes urgent when Rowan returns to town. Meanwhile, the mayor's wife is killed, and Olivia's asked to handle the fallout; and Fitz faces an uphill battle when he seeks the vice president's support in getting a crucial bill passed.

Rowan blusters away in one of his patented rants as to how he knows Olivia much better than her friends do. He gives her 48 hours end the case that’s being mounted against him regarding B613. Rowan then bids adieu to Russell, who is awakening from the sedative he’d been given. Olivia manages to convince him that the headache he’s feeling is from having a little too much wine. Then she locks all the locks on her door once more.

The Brandon Bill is something that came about after the fatal shooting of Brandon Parker addressed in “The Lawn Chair.” In related news, activist Marcus Walker is leading in the political race against Mayor Verrano. He’s also sleeping with his opponent’s wife. The two of them are in bed together when they hear a noise. Marcus hides in a closet. He watches as three masked men enter and the mayor’s wife is brutally killed. He calls on Olivia Pope to fix this.

The plan of action is act as if none of this ever happened. The mayor’s wife is to become a missing person after a little cleanup by Huck and Quinn. A short time later, Olivia chastises the DC police chief for bringing in Marcus without probable cause. She makes it clear that there’s to be no indication that her client was ever at the station.

Someone in the mayor’s office hacked into Marcus’s email to send threatening messages to the dead wife. One of the killers is named Mickey. Actually, that’s just a nickname for the mayor’s personal driver. The guy has really big ears. The only way to get justice is for Marcus to testify. That’s not going to happen. Marcus opts to go forward with his political career. Then he doesn’t. Marcus steps up to the podium at a press conference to admit to his affair and to tell the world that the mayor is a murderer. Olivia assures him he did the right thing.

Jake lets Olivia know that she can call on him if needed. He later gives David the details of Operation Remington. The pilot who followed the order to kill 329 people was Fitzgerald Grant. Later, Olivia pours herself some wine. She contemplates using the Fitz phone, but calls Russell instead. The guy knows he wasn’t drunk the night before. Something happened to him. Olivia admits that when she’s with him, as Alex, her life is uncomplicated. She seduces him into having more uncomplicated sex with her.

Vice President Susan Ross is the deciding vote on the Brandon Bill. She won’t vote on something she hasn’t read. It’s only 12-hundred pages long. That just means a frustrated Cyrus will have to wait. David is called in to appease the veep with her questions on the bill. That’s not an easy task. The result of their meeting leads to a delay of Mellie’s impending senate run announcement.

The First Lady then tries to take matters into her own hands. She’s shocked to learn that Susan is hip to her political agenda. Then it’s time for Fitz to have a chat with her. He tries his best to intimidate Susan. It doesn’t work. Susan is not there to advance her own agenda. She’s there to help her president make real change. Fitz has no choice but to get on board with changing the bill to make it actually work. The press will need something else to talk about now. So Mellie announces her intentions to run for the senate in Virginia.

Olivia lets her father know that she’s not stopping the case against B613. She’s going forward with her pursuit of justice. She’ll do so even if it means hurting the president. Rowan is actually proud of her for actually doing this. She’ll be a worthy adversary. But he can’t adhere to her call for no more blood. Yes, there will be blood.

Jake is tricked into entering the OPA offices where he is attacked by a masked assailant. A mighty battle takes place. The mask comes off. Jake’s attacker is a familiar face. It’s Russell. He gains the upper hand. He stabs Jake in the gut. Russell takes a moment to express his disappointment at how easy all this was. Then he stabs Jake again, and again, and again. 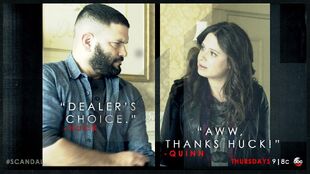 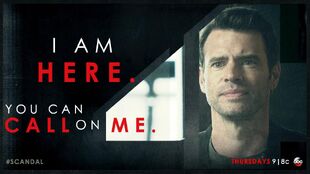 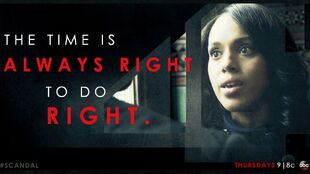 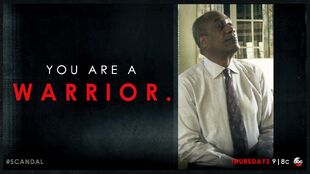 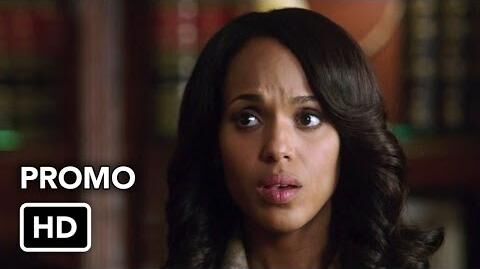 Retrieved from "https://scandal.fandom.com/wiki/I%27m_Just_a_Bill?oldid=68738"
Community content is available under CC-BY-SA unless otherwise noted.