View source
watch 01:47
Who is Huck?
Do you like this video?
Play Sound

Diego Muñoz, better known as Huck, works as a member of the crisis management team at Olivia Pope & Associates.

Huck is a former black ops agent/assassin for B613, the top secret sub-division of the CIA. He was married to Kim and together, they have a son named Javi.

Fresh out of college, "Huck" enlists in the marines as a Private First Class (PFC) leaving his girlfriend Kim behind. Shortly after beginning his tour in Kosovo he is called back to the United States where he meets with Crosby and is offered a position with the CIA, at the meeting he also met Charlie for the first time. There, he was trained by Charlie and became an asset to intel gathering through torture and technology.

He becomes a part of the CIA-funded, top-secret, off-the-books program, "B-613", with "Charlie", "Wink", "Matches", "Paul Gray", "Melvin Feen", and their case officer, "Crosby". In this program, they killed 3 world leaders and made it look like a heart attack.

At one point, Huck's enjoyment of his job began to disturb him and, because of the nature of his connection with CIA, his past connections and everything he had was taken from him, leaving him homeless and without any money when he contracted out. One day while on the subway, Olivia Pope finds and helps him. He has since then stayed away from his past activities and has been helping out at her firm as their tech guy.

Kim was Huck's wife. They married and bought a house when Kim found out she was pregnant shortly after Huck started working for B613. Even though he knew he was not supposed to be married or have kids he still chose to do so because he loved Kim. Not too long after their son, Javi, was born Charlie payed a visit to their home reminding Huck about the rules B613 agents had to follow. Huck knew he had to get Kim and Javi away from Command and B613 so he had them pack up. But before he could leave with them, he was taken by B613 and put in the “hole” until he began to believe Kim and Javi where only a figment of his imagination. Years later he then saw Kim and Javi on a subway platform shortly after he left B613 and met Olivia. He reunited with them years after seeing them on the subway platform when Quinn found them for him but he ultimately decided that they where better off without him. It is unknown whether or not Kim and Huck divorced, if she kept his last name (Muñoz) or had Huck pronounced dead with his true name Diego Muñoz.(Seven Fifty-Two)

Huck met Becky at an Alcoholic Anonymous (AA) meeting. (Beltway Unbuckled) She pursued him and he eventually asked her out on a date; he goes to Harrison for guidance on where to take a girl out for a date; Abby and Quinn help out to groom Huck for his first date. (All Roads Lead to Fitz) Things get bad when it is revealed that Becky was the one who attempted to assassinate the president. He had planned to run away with her but changes his mind at the last minute and then she kills his "family"; Huck is then detained by the government under the patriot act. (Blown Away) After weeks of being tortured he tells his torturers that he'll talk but only to the men behind the mirror, after he learns that the president was not dead yet he tells them - "she's not done yet. David Rosen gets him released into Olivia's custody. He assists the government to get Becky in custody. And at that point she reveals her real name to him... Kate. (One For the Dog)

Brief background... On Olivia's order Huck saves Quinn from being arrested in California for the murder of six Cytron employees, including her boyfriend at the time Jesse Tyler. He brings her to DC and sets her up with a new identity.

Huck met Meg when he came asking her about her friend Jennifer. Meg thought Huck was going to hurt her when actually, he just wanted to ask her information. Huck later developed feelings for Meg and he helped upgrading the security of her apartment and taught her how to defend herself from the people who might try to hurt her.

They got closer and they started seeing each other until Meg betrayed him and tricked him about wanting to see her best friend Jennifer, whom she thought was dead. When Huck took her to see Jennifer, she shot Jennifer in the chest and the head. She then shot Huck as she was ordered to.

→ See and enjoy 487 pictures of Huck at Images of Huck. 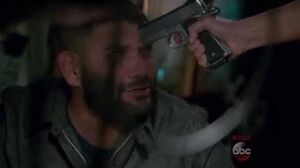 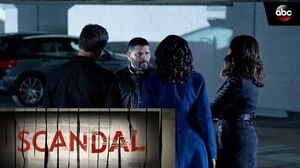