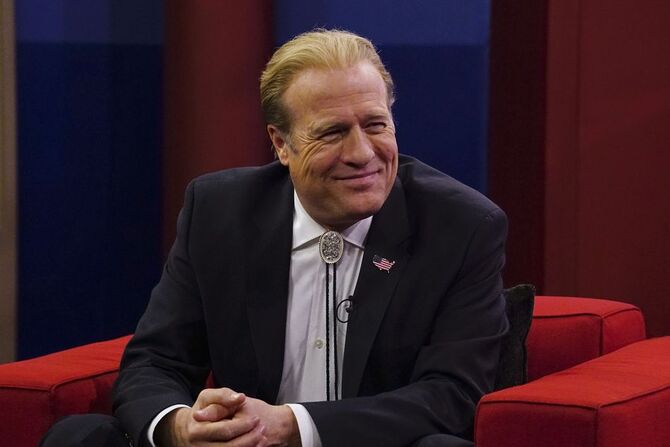 Hollis Doyle is a lobbyist for a Texas based energy company and a candidate for President of the United States in the 2016 presidential election. He plays dirty tricks to get what he wants. He's been married five times and has seven sons and one daughter.

Hollis was responsible for hiring Jesse Tyler to rig the voting equipment that won the election for Fitz. Doyle Energy was awarded a 2 billion dollar government contract shortly after Fitz's inauguration. Hollis put a hit out on Jesse when he got greedy and asked for more money. Jesse and six other co-workers from Cytron were killed in an explosion. (Truth or Consequences)

Hollis got chummy with Vice President Sally Langston when she served as Acting President after Fitz was shot. (Happy Birthday, Mr. President)

Cyrus put a hit out on Hollis, hiring Charlie, after Hollis was arrested by David Rosen for voting irregulatories. Cyrus puts the hit out to ensure that Hollis doesn't speak; but at the last minute Huck saves Hollis on one condition, that he doesn't take David's deal. (Nobody Likes Babies)

Hollis has a love for a Gettysburger with no bacon and no cheese, with no huspuppies on the side and no ketchup. He is constantly sending his assistant Trixie to go get him a burger. (Nobody Likes Babies / Snake in the Garden)

Hollis' only daughter, Maybelle, with fourth ex-wife, Debora Clarkson, was kidnapped approximately ten months after his legal trouble with David Rosen. He inquires the help of Olivia Pope & Associates to help get his daughter back safely; however he does not believe that she was actually kidnapped. He's under the assumption that she's faking it and just trying to milk him for his money. Not till Maybelle's right ear shows up in his mail does he finally believe that she was really kidnapped and that she's not doping him. Hollis has a brief bonding moment with Quinn Perkins when he shows that "the devil" can have a soft side. He pays the ransom; but shortly after getting Maybelle back the OPA team learns that Maybelle did in fact trick them all. Hollis, crushed by what his daughter did gives her an ultimatum... family or money (12 million) but if she chooses money she can never come back to the family. Sadly she chooses the money. (Snake in the Garden)

Retrieved from "https://scandal.fandom.com/wiki/Hollis_Doyle?oldid=70416"
Community content is available under CC-BY-SA unless otherwise noted.