President-Elect of the United States

"A Stomach for Blood"

Francisco Vargas was the elected President of the United States who was assassinated during his victory speech.

Francisco Vargas was born in Allentown, Pennsylvania and grew up in Philadelphia, to parents who were from Mexico. His father got his PhD from Penn State and worked as an economist while his mother became a nurse. He has a younger brother, Alejandro, who was said not to be as successful as Francisco, and has run all his campaigns. He was said to be a "great student and gifted athlete" while in high school. He joined the army and was with the Special Forces in the First Gulf War and when he returned he married his high school sweetheart and had two daughters with her, Sara and Anna. His daughter Anna is five years old and receiving treatment at a Pennsylvania hospital for cancer. He graduated from Penn State. He was elected to the Philadelphia City Council when he was 32 and was Mayor at 36 and 2 years, he was made the first Hispanic governor of Pennsylvania. His political standings are described as pro-choice, pro-gun, pro-growth, pro-earth, pro-science and pro-religion.

Cyrus Beene becomes interested in him as the next President of the United States and claims that his cousin passed away and he had to attend his funeral when he was actually going to watch one of Vargas' meetings about his Education Bill. Ethan claims that the only problem with Vargas is that no one knows who he is. Cyrus fixes this by sending a gun man into the building that Vargas is in and having him be shot by Tom Larsen in order to have Vargas look like a hero and get him on everyone's radar.

After California was called for Governor Vargas in the 2016 presidential election, Vargas was the apparent President-elect. However, Vargas was assassinated on election night, making the presumptive Vice-President-elect, Cyrus Beene, the person most likely to succeed Grant as president.

On election night, he won the votes over Mellie and became the presumptive President-Elect. When he was giving his victory speech in Philadelphia, he was assassinated by Rowan. Because he was assassinated on Election Day, long before the Electoral Colleges votes were cast and counted, he was never actually President-elect.

On the results night of the Presidential Election 2018, Francisco Vargas was assassinated by an unknown person. Olivia Pope & Associates opened their own investigation, did some digging, and found evidence that showed that Cyrus Beene killed Francisco. Cyrus and everyone connected (that knew Francisco) have since been interviewed and investigated. ("Survival of the Fittest").

After falsely incarcerating Tom and Cyrus, Olivia discovers that Tom was nowhere near the shooting as it happened, so he could not have been the killer. In flashbacks, the events of the night are revealed, and it turns out that the killer was none other than Eli Pope, Olivia's own father, who was blackmailed by an Theodore Peus and Samantha Ruland who wanted Mellie in The White House. ("Extinction"). 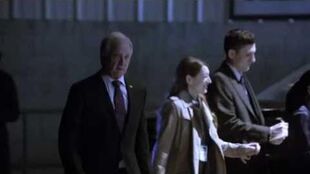 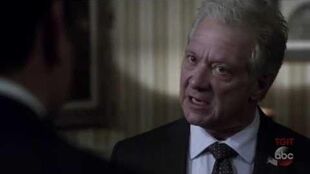 Scandal 6x03 Frankie Tells Cyrus He Will Put Him in Jail Season 6 Episode 3
Community content is available under CC-BY-SA unless otherwise noted.
Advertisement