View source
watch 01:24
Who is Fitz Grant?
Do you like this video?
Play Sound

44th President of the United States

Fitzgerald Thomas "Fitz" Grant III is an American politician who served as the 44th President of the United States. Fitz was married to his eventual successor Mellie Grant, with whom he has a deceased son, Jerry Grant Jr., a daughter, Karen Grant and a son, Teddy Grant.

Born to lead, President Fitzgerald Grant checked every prestigious box on the way to the White House. He had the Ivy League degree, the decorated military service, the perfect wife and children, and years of experience as the Governor of California. What he didn't have was passionate, devastating love.

He found it in Olivia Pope. A divorce, a re-election, and countless scandals later, he finally has what he wanted all along. But can he hold onto both his office and the woman he loves?[1]

Fitz faced United States Senator Sally Langston of Georgia (who would later become his Vice President) in the 2010 Republican primaries, then ran for the presidency against Maryland Governor Samuel Reston of the Democratic Party, Noah Montgomery of the Independent Party, and Matty Bans of the Green Party.

Early in his campaign, he was trailing Sally Langston. At one point, Cyrus Beene calls in his former student, Olivia Pope, to help their situation. Olivia suggests that Fitz be seen with his wife, Mellie, more in public as the loving couple they're supposed to be. This gave him just the publicity he needed. Unbeknownst to everyone, Fitz was beginning to fall for Olivia, so he tried to get her fired off of his election campaign staff. Eventually, they began an affair. (The Trail)

Shortly after Fitz became President - specifically on the night of his State of the Union speech - the affair ended with Olivia's resignation as Communication Director from the White House Administration once Mellie became aware of the affair and subtly let Olivia know she knew. (Happy Birthday, Mr. President)

Throughout the course of his campaign, Olivia, Cyrus, Mellie, and Verna Thornton engage in dirty tricks to get Fitz ahead, including leaking false information about Fitz's opponent, Samuel Reston, and, eventually, employing the help of Hollis Doyle to rig electronic voting machines in a single Ohio county, fixing the election to assure Fitz's election. (A Criminal, A Whore, An Idiot, and A Liar)

Fitz's father Jerry Grant and his mother are both deceased. Fitz was married to Mellie and they have three children together; Karen Grant, Teddy Grant and Jerry Grant Jr., who is deceased.

Fitz spent time as a pilot in the U.S. Navy. He saw combat in the Gulf war where at one point his plane was struck down behind enemy lines in Iran on 'Operation Remington' in 1991. He served with Jake Ballard.

Fitz followed in his father's footsteps after he left the Navy and began a career in politics by serving in the California State Legislature for several years. He was the Governor of California (elected in the 2003 Recall Election, which removed Democratic Governor Gray Davis from office and reelected in 2006) before his campaign for presidency in 2008.

After winning the Presidency, he resigned from the governorship in December 2008 and was succeeded by fellow Republican Lieutenant Governor Andrew Nichols, who served out the remainder of Grant's second term. Nichols lost the 2010 gubernatorial election to Democratic California State Attorney General Jerry Brown (who went on to winning re-election to a fourth full term in 2014).

He ran for re-election in the 2012 presidential election in a rematch against Maryland Governor Samuel Reston, the Democratic nominee as well as facing his own Vice President Sally Langston, who ran as an Independent candidate. President Fitzgerald Grant was reelected to a second term and inaugurated on January 21, 2013 as President of the United States.

After Mellie was sworn in on January 20, 2017, Fitz returned to the White House with Mellie to spend time with his son and talk to Olivia. Instead of taking off from the east front of the capitol, like his predecessors, he took off on the south lawn of the White House in a marine helicopter. Former President Grant later flew to Vermont to begin his post presidency.

Mellie and Fitz met at Frank's Tavern in Boston on a blind date set up by Fitz's father Jerry and one of his old friends. Mellie was a clerk to the friend of Jerry's. The two went on to attend Harvard Law together. Since then they've had a dicey relationship, which got worse when Olivia Pope became a part of Fitz's presidency campaign. It's been a back-and-forth battle of they love each other... they hate each other; Mellie planning to leave him but staying; Fitz going off to Olivia and then coming back to Mellie. One of the most dramatic love triangles. He is the first president to divorce his wife while in office, he divorced then First Lady Mellie Grant in 2014.

Their resentment for one another was prevalent when Fitz refused to support his ex-wife's bid for the GOP nomination, instead endorsing his vice president, Susan Ross. However, he later endorsed Mellie after Susan withdrew. Since then, the relationship has somewhat improved with the two of them sometimes working together after Fitz leaves.

Fitz met Olivia Pope during his primary campaign shortly after the Iowa Caucus. His campaign manager, Cyrus Beene brought her in to help turn around the floundering campaign. He quickly became enamored with his young new sharp-tongued, no nonsense co-campaign manager and started a torrid affair. 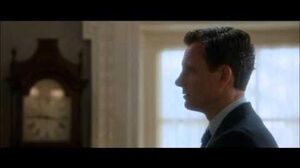 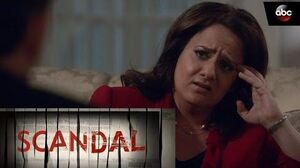