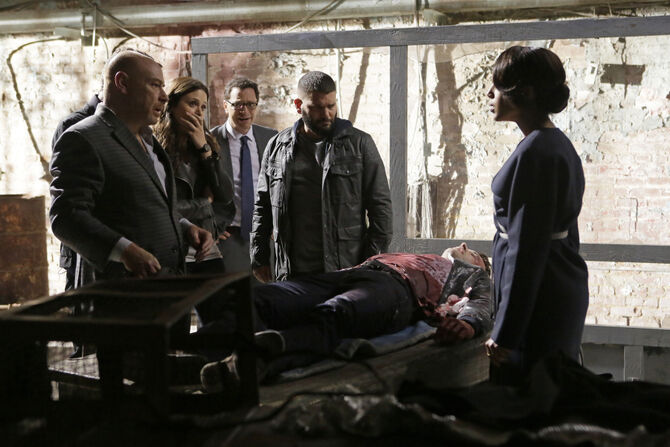 First Lady Sings the Blues is twentieth episode of the fourth season of Scandal, and is the sixty-seventh episode overall.

The team taking down B613 is in serious danger and forced to take drastic measures to ensure their safety. In the White House, Mellie is mortified when the nation turns against her and Cyrus is forced to come to her defense.

Quinn enters the OPA offices to peruse the daily paper and brew up some coffee. Her morning routine is disrupted by the sight of a bloody Jake sprawled out on the conference room table. BANG! A freaked out Quinn fires her gun skyward when she hears someone enter. It’s Huck. He realizes Jake is still warm. He literally beats the life back into him. 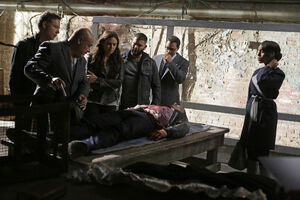 Jake is rushed to a safe house. An off-the-books doctor will only help if Olivia does him a favor. It involves a retired KGB assassin. Black Sable is the codename of the ruthless murderer she needs to assist. These days she goes by the name of Mary Peterson. This stone cold killer is now a grandmother who bakes cookies. She hasn’t had a handler in 27 years. However, she recently received a call to go back to work. An attempt to intimidate her handler fails. Olivia promises a distraught Mary that they will shut this down. Jake needs blood. So, Quinn and Charlie go get some. The two medical staffers bound and gagged in the hall don’t have much to say about it. In other news, due to the lack of the vengeance-filled phone call Rowan was expecting from his daughter, he realizes that Jake is still alive. He wants Russell to find him. That doesn’t happen. So Rowan shoots Russell. It’s a flesh wound. It’s a way to get him close to Olivia.

Olivia rushes to Russell’s side upon learning he’s been shot. She then offers a deal to Mary’s handler. She’ll give him the head of B613 in exchange for her client being let off the hook. While she’s away, Jake awakens after a lengthy surgery. The doctor has strapped down his arms. It’s a necessary move to help Jake remain as still as possible to heal. This proves to be a difficult task. Jake is panicked when he looks over to see an awakening Russell lying next to him. Jake struggles mightily to the point where he puts his life in jeopardy. Fortunately, his actions are enough to thwart Russell’s attempt to kill him. Jake is still in bad shape. Olivia lets everyone know that this will all be over once Mary’s handler sets forth a plan to kill Rowan. No one notices Russell on the other table eavesdropping on everything that’s been said.

Sally Langston is having a grand old time ripping into Mellie over her bid to become a Virginia senator. To quell her criticism, a plan is put into play to make it seem like the president and first lady lead separate lives. As for the legality of Mellie’s senate run, Abby is assured by David that there are no rules prohibiting this because all the misogynistic folks who make the laws simply never thought it would happen. What luck! Still, the only way to sway public perception is to have someone go toe-to-toe with Sally on her TV show. A woman won’t do the trick. No, it would have to be a man. Perhaps the president’s “right-hand man?”

Fitz orders Cyrus to go on TV to defend Mellie’s senate run. Things on Sally’s show start out civil enough for about three seconds. Then the gloves come off. Cyrus lands a series of verbal uppercuts to deflect Sally’s jabs. He has her against the ropes. Then Sally staggers her guest with the notion that he should be the one running for senate. Cyrus is wobbly, but quickly regroups. He unleashes a flurry of mini-lectures on sexism with the knockout blow coming with a mention of the Sally’s dead hubby, Daniel Douglas. The winner by TKO: Cyrus Beene! 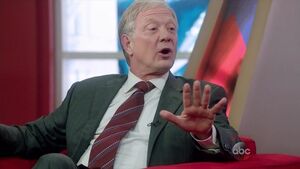 Even though Cyrus held his own with Sally, there’s still a conflict of interest. The thought of leaking that the marriage is over comes up. That’s not something Mellie is willing to do. She and her husband came in as a team and they’ll go out as a team. This has Fitz making a late night call to Olivia. He wants to help Mellie. Olivia advises him to make the conflict of interest a selling point to the voters of Virginia. So that’s what happens, and it works. Too bad Cyrus thinks the president now looks like he’s whipped. Olivia holds an unconscious Jake’s hand. She tells him they should have stayed on that island. Jake awakens. Once again, he struggles to speak. There’s no way to let Olivia know that that the man who attacked him is standing right behind her. A short time later, Olivia heads over to Mary’s house. She finds a horrific sight inside. The hits keep coming when her handler is discovered dead in her trunk. Rowan places a phone call to his daughter. He lets Olivia know that, against him, she will never win.

The doctor leaves the safe house once he learns that his friend is dead. Olivia wants to shut everything down. The only way they can survive is to call Rowan to tell him he’s won. Russell confirms that the assault on B613 is done. Jake is now in a hospital. As for Russell, he’s advised to initiate Foxtail. Whatever that is, it involves staying on top of Olivia. Actually, Olivia is staying on top of him in sexy nighty with a gun pointed at his skull. She knows this guy is B613. Now she wants to know what Foxtail is. 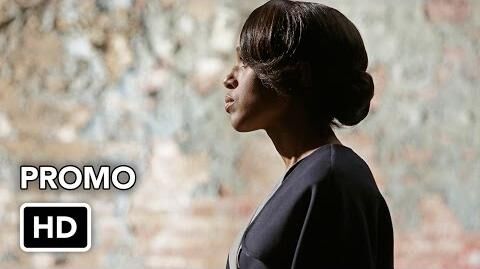 Retrieved from "https://scandal.fandom.com/wiki/First_Lady_Sings_the_Blues?oldid=68739"
Community content is available under CC-BY-SA unless otherwise noted.