Defiance is the seventh episode of the second season of Scandal, and is the fourteenth overall.

Harrison leads the team in managing a billionaire businessman who seems to have lost his sanity. While Olivia is helping Senator Edison Davis fill the Senate Majority Leader seat, after she just helped the former Senate Majority Leader, Senator Schuman, publicly resign after having an affair with an intern.

Meanwhile, the White House celebrates the President’s 50th birthday, and James continues to investigate Cytron and discovers something that could change the fate of the country.

Harold Pierce created a chip that is the basis for every cell phone that’s out there. His son, Skip, and ex-wife think the guy’s had a psychotic break. He’s riding motorcycles through his mansion and keeping time with a much younger lady named Jenna. This is all happening a few days before his multi-billion dollar company is scheduled to have an IPO. Harrison takes the lead to help make sure the company goes public without incident. The plan is to gather evidence to prove Harold isn’t in his right mind. This doesn’t work out. The shrink sent in to evaluate Harold is escorted out of the mansion by his patient at gunpoint. Time for Plan B!

The mansion’s phone and Internet line are cut so Harold can’t use social media to sabotage the IPO. As Harrison and Abby babysit the home, Jenna serves them both chips and margaritas. She’s a very accommodating gold digger. Harrison listens to David’s desperate voicemail message to Abby while she sleeps. He feels guilty for sabotaging their relationship. As far as the case, things take a turn a doctor who is called to help treat a sick Harold turns out to be a minister. The house call was all a ruse so Harold could marry Jenna, who is now the only person legally authorized to have him committed. Well played, Harold. Well played.

Harold and Jenna dance the night away inside the mansion while Harrison and Abby also sway to the music on the outside lawn. The next morning, Harold shoots Skip in the arm. Huck treats the wound inside the mansion to avoid the press. Harrison has a chat with Harold and Skip alone. He learns that everything that’s happening is a father’s attempt to stop his son from spending an empty life building a pile of money. Harold is finally doing something that makes him happy. Skip assures his dad that what truly makes him content is working at his family’s company. These two ultimately decide to not go public with their empire.

David needs someone in the press to look into the notion that Hollis Doyle rigged voting machines in the last election so that he can build a pipeline through the middle of the country. Unfortunately, James isn’t buying into his conspiracy theory. In other news, Fitz just can’t seem to stop thinking about Olivia. He’s also upset to learn there’s going to be a big gala for his 50th birthday. Stevie Wonder is even going to perform!

Before the big public birthday bash, a private party is held in the residence with a few close friends (Verna, Hollis, Cyrus & James). Mellie sees that Fitz is actually having a good time. He tells the election night story about how he won the presidency thanks to the votes in the tiny county of Defiance in Ohio. This was, for lack of a better word, in “defiance” of all the exit polls that were predicting his demise. After hearing this story, James revisits the file David gave him to see that Defiance is listed amongst the documents. Suddenly a conspiracy theory doesn’t seem so unreasonable.

James secretly heads off to Defiance County, Ohio to take a look at their voting machines. Unfortunately, all the memory cards that could have been used to reassign votes are missing. Well, almost all of them. There’s one voting machine on display at the local high school. The memory card inside that particular device proves that it was rigged to give Fitz some of his opponent’s votes in the final tally. This is huge. It’s a scandal that could change the fate of the entire country.

Quinn pesters Huck about all kinds of things a guy like him would know about. Things like the kind of drugs that can knock people out for 10 hours at a time. She also wants to know how to transport an unconscious individual from Point A to Point B. It’s all part of her secret research into her own kidnapping. She figures out that Huck may have been the one who brought her to Washington on a private plane registered to Verna Thornton, the Supreme Court Justice who happens to be one of Olivia’s clients.

A senator who slept with a young intern (it happens) resigns as Majority Leader upon advice from Olivia. Edison Davis can now jockey for the majority leader position himself. That’s not something Hollis Doyle wants. You’d think Fitz would feel the same way especially after seeing surveillance photos of Edison getting chummy with Olivia. Nevertheless, the president makes a move that all but insures Edison gets the gig. A pleasantly surprised Cyrus Beene believes this means Fitz is finally over Olivia, who now agrees to accompany Edison to the birthday gala.

Hollis is ticked that Edison is going to be the new Majority Leader. He makes a not-so-veiled threat to Cyrus. He assures him that he has no idea what he’s capable of. When the night of the president’s big birthday bash arrives, Olivia is dressed to kill as she and Edison head off to the party. Fitz arrives via presidential limo with Mellie, who tells her husband that she no longer wants to go. She seems nervous as she tries to convince Fitz to bail on the party. It’s too late for that though. Fitz steps out of the limo and waves to the cheering crowd. BANG! A gunshot rings out in the night. Fitz is jolted backwards. What just happened?! What just happened?!

~ Special Thanks to ABC.com for providing the recap for Defiance [1] ~ 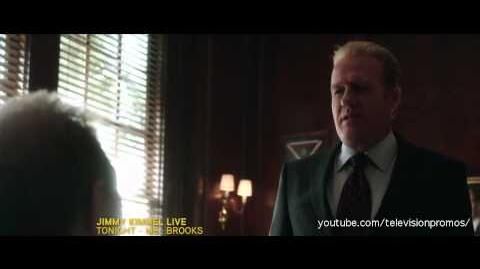