watch 01:31
Scandal Profile: David Rosen
Do you like this video?
Play Sound

Attorney General of the United States

David Rosen was the Attorney General of the United States under former President Fitz Grant and later Mellie Grant. He was an Assistant U.S. Attorney who lost his job after the Defiance scandal was killed. He was murdered by then-Vice President Cyrus Beene.

David was an up-and-coming Assistant U.S. Attorney in the U.S. Attorney's office until he lost the biggest case of his career, the prosecution of Lindsay Dwyer. He lost because his frenemy called in a favor to "fix" the case by having it acquitted. (White Hat's Off) After digging too deep into how he lost the case and into Olivia Pope, Verna Thornton used her juice as a Supreme Court Justice and asked the U.S. Attorney, Pat Wexler, to fire David, by calling it "taking some time off." However, that didn't stop him from his own personal crusade against Olivia, he had help from his assistant Alissa and surprise surprise one of Olivia's own gladiators, Abby Whelan. They dug deeper and deeper, which eventually led him and Abby onto the path of the Defiance Conspiracy.

David became extremely shaken after he witnessed the execution of Vanessa Chandler, Shelby Moss and the murder of James Novak by Jake Ballard. Jake threatened him to cover up the death of James as a carjacking otherwise he'd kill him too. He kept quiet for as long as he could from Abby but he finally cracked and told her the truth, now that they're in a truthful relationship. Abby told Olivia of what happened. David met Olivia outside the Justice building where they sat and talked. He didn't want to send an innocent man to jail. But she convinced that sometimes you have to lose the battle to win the war and promised him that they'd do it together... take down B613. (Kiss Kiss Bang Bang)

Jake Ballard comes back to Washington, after leaving the Island with Olivia. He asks David for the files on Harrison's death but David refuses. He's later asked by Cyrus if he'd like to be the next Attorney General. Just as David Rosen is about to be confirmed Attorney General, 'Lizzie Bear' shows Cyrus pictures of David's ex-wife; who has been a victim of Domestic Violence. Elizabeth tells Cyrus these pictures will hurt David as a candidate for Attorney General and Cyrus for nominating him. When David is blackmailed by Elizabeth North, he takes things into his own hands by blackmailing the Senator with B613 files, which ultimately forces the Senator to confirm David as the new Attorney General.

David and Abby's relationship sparked up when he was on his witch hunt out to get Olivia. Knowing he needed to get to someone on the inside of OPA he sparked up a conversation with Abby in bar and they wound up in bed together. (Hunting Season) They continued to have a sexual relationship but things got dicey when Abby discovered what David was really up to, when she saw his infamous wall. Luckily for David Abby was already suspicious of Olivia so she assisted him with his crusade. (Beltway Unbuckled) Their relationship started to get more serious, David even offered Abby a drawer to put some clothes in; but not too long after that David was setup by Olivia & Harrison to make it look like he had beat up one of his past girlfriends. With her abusive past Abby immediately broke it off with David. (Spies Like Us) After learning Olivia faked the accusations of David beating his ex-girlfriend, Abby reunites with David. However, when Abby steals the memory card and prevents David from being able to prove voter fraud in Defiance, Ohio, David ends things with Abby again. (Nobody Likes Babies)

David tried to rekindle the relationship and held Abby's hands while they were at the state dinner Mellie Grant held for President Rashad. However Abby hesitated and said that they are very good friends and don't want to ruin what they have. (Pressing the Flesh) David respected her opinion and tried to not get romantic with her. Abby however realized later that they're good together and kissed him back. (Vampires and Bloodsuckers)

When Elizabeth North was invited onto "The Liberty Report," she threatened to tell Sally Langston everything about Olivia Pope and Fitz Grant's relationship. She only wanted a place back in The White House after she was fired when Fitz gave Cyrus Beene his old job back as Chief of Staff. To try and change Elizabeth's mind, Cyrus tells David Rosen to tell her that she can't do that under the United States law and that doesn't work at all. To make Elizabeth happy, Fitz gave her the job of Susan Ross' Chief of Staff. Elizabeth then went back to the Department of Justice to visit David Rosen to get her seized laptop back, and Elizabeth gets David to admit he likes her before sleeping with him.

Susan went to see David in his office to discuss her position as Vice President of the United States; after a heart-to-heart and a quick make-out session with David, Susan finally agreed to run for President; thanks to David calling her a "Warrior". She wanted to quit but David managed to change her mind. David loved Susan so much that he proposed to her; Susan said yes but later said no because Olivia revealed that David had released prisoners to make Senator Louise Baker endorse Susan for President - David insisted that he done it out of love but Susan could not forgive him again and dumped him; officially this time. he said he wasn't sleeping with anyone else but he was sleeping with Elizabeth as well.

David was seeing Samantha when she was working with Peus to make sure that Mellie became the President. At first, David didn't know that Samantha was apart of the organization. When Olivia Pope & Associates and Jake found out about Samantha and Peus, Jake went to warn David about Samantha. David needed to still seeing Samantha to act like they still don't know about her true identity. He then faked seeing her until she died. After she died, Rowan gave him Samantha's head to find out about her real true identity. He brought it to Abby's home and they called Jake to find the real information about her. Later they found out that her real name is "Gertrude" and that she and Peus were just taking orders from someone else. 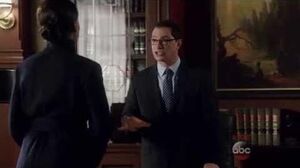 Scandal 4x14 Olivia and David "People who look like you" scene 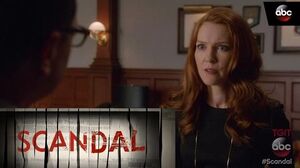 Retrieved from "https://scandal.fandom.com/wiki/David_Rosen?oldid=70926"
Community content is available under CC-BY-SA unless otherwise noted.