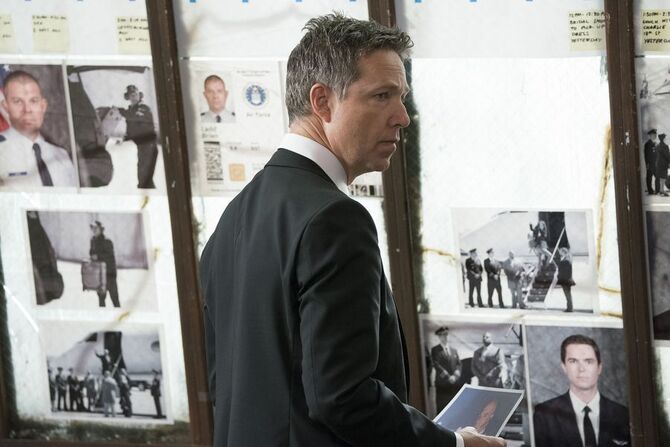 "You pulled off the impossible. You made hell freeze over.. miracle. You can't quit. You don't quit. Miracle workers don't get to quit." - Charlie to Olivia Pope ("Dead in the Water")

Charlie, real name Bernard Gusky, was among the B-613 employed spies who were part of B613, along with Huck and Jake. Charlie, like Huck and Jake, is a former black-ops agent from division "B613."

Charlie has a strong sugar addiction. Almost every time he's seen he is sucking on some kind of sucker or eating some other type of sugar candy or pastry.

Once B-613 hired Huck, Charlie took him underneath his wings and trained him, showed him how much fun it was to kill people. But when command found out that Huck had a family he sent Charlie to either take care of the problem or remind that he has to "take care" of the problem. Charlie takes Huck away and tosses him in a hole when he doesn't kill his family. Huck was left in a hole for almost a year. When they finally let him out Charlie helped him get away from the CIA by faking his death. (Seven Fifty-Two)

Charlie was hired by Cyrus Beene to kill Amanda Tanner. After Huck tortures him into revealing where Amanda's body is, he moves to New Mexico under Huck's orders, but not before he was suppose to kill Billy Chambers for Huck. Before finally leaving, he visits Cyrus at their home to ask him to wire the rest of his payment for killing Amanda Tanner. (Grant: For the People)

But Charlie ignored Huck's order to kill Billy, while he was torturing Billy, Billy offered Charlie money and power. Being the opportunist that he is, Charlie took Billy up on his offer. (White Hat's Back On)

Charlie returns to D.C. after receiving a signal from Huck through the radio for a meeting about B-613. Still visibly holding a grudge against Huck, he is much more confident now and not as scared of Huck as he was during their last encounter, he constantly reminds Huck of his torture of him subtly. He later almost shoots Feen after it is revealed that he was the traitor but was stopped by Huck. Later, he is seen contacting someone, saying that he is staying and is most likely going to start doing hits again. (Spies Like Us)

Charlie calls Cyrus to tell him he's back in town... so Cyrus uses him to follow James because he thought James was cheating on him. A few months later Cyrus calls Charlie to kill James, his own husband - when David subpoena's James to testify about Defiance. But at the last minute he calls him off, but of course Charlie is still gonna bill him. (Blown Away / Nobody Likes Babies)

Charlie stuck around and started to help the mole by setting up and killing CIA Director Grayden Osborne. And then going after and stuff him in a box. All the facts are still unanswered. Once the OPA team figure out that Charlie is involved with the mole and helped setup Osborne's attempted suicide they go looking for him. And surprise surprise they find out that he has a girlfriend, Tammy. Of course he was only using this girl to get information for the mole. (Snake in the Garden, Molly, You in Danger, Girl & A Woman Scorned)

Charlie knew he was in trouble when Jake Ballard figured out that he was onto him and goes to Olivia Pope, in effect turning himself in - in a manner of speaking - to Huck & Olivia. When the team comes back from a dinner break they find Charlie holding David at gun point and then he surrenders. Quinn and Huck take Charlie to the safe house so they can get the mole's name out of him - Billy Chambers. (Any Questions?)

Quinn started a professional relationship with Charlie, when he framed her to kill a security guard. The trust began when she was at the gun range, Charlie offered her some help, at first she was reluctant to take it but then after many failures of hitting her target she welcomed Charlie's advice. Not too long after that she started tailing him to see what kind of covert mission he was on. After he tricked her into killing the security guard she became B-613 property. Their romantic relationship began at some point, and continues even though they are now also colleagues. At the beginning of season six, Charlie proposed to her while working on a case and they are now married and have a daughter together.

Retrieved from "https://scandal.fandom.com/wiki/Charlie?oldid=70407"
Community content is available under CC-BY-SA unless otherwise noted.