Episodes from Season Three of Scandal

"It's Handled" October 3, 2013
Directed by: Tom Verica - Written by: Shonda Rhimes
With Olivia’s name out there as the President’s mistress, both the White House and Pope & Associates face their biggest Scandal to date, and a surprise allegiance is formed in order to get things handled. Meanwhile, Olivia’s father, Rowan, will stop at nothing to carry out his orders and no one, including Olivia, can stand in his way.
02 | 31

"Guess Who's Coming to Dinner" October 10, 2013
Directed by: Allison Liddi-Brown - Written by: Heather Mitchell
Through flashbacks we learn more about Olivia’s estranged relationship with her father. Meanwhile, both the White House and Pope & Associates are still in the middle of cleaning up the very big and very public mess they created.
03 | 32

"Mrs. Smith Goes to Washington" October 17, 2013
Directed by: Jeannot Szwarc - Written by: Matt Byrne
A Midwestern mom hires Pope & Associates under mysterious conditions that lead to a very dangerous situation. Meanwhile, Fitz and Mellie admit their true feelings for each other.
04 | 33

"Say Hello to My Little Friend" October 24, 2013
Directed by: Oliver Bokelberg - Written by: Mark Fish
With Pope & Associates still struggling to find clients, the team decides to take on a philandering senator who enjoys taking photos of his not so public areas. Meanwhile, Mellie gets involved in her own Scandal with Democratic Congresswoman Josephine Marcus.
05 | 34

"More Cattle, Less Bull" October 31, 2013
Directed by: Randy Zisk - Written by: Jenna Bans
The team investigates Democratic Congresswoman Josie Marcus, while Olivia and Mellie have a surprising run-in during the White House Correspondents’ Dinner. Meanwhile, Jake and Huck get closer to the truth about Operation Remington, which could lead to devastating results.
06 | 35

"Icarus" November 7, 2013
Directed by: Julie Anne Robinson - Written by: Peter Noah
Olivia must make a very important decision that will affect all of her relationships in the White House, and Harrison’s allegiance to the Gladiators is tested. Meanwhile, the team continues to prep Josie Marcus while Cyrus and Mellie plot against her.
07 | 36

"Everything's Coming Up Mellie" November 14, 2013
Directed by: Michael Katleman - Written by: Peter Nowalk
Mellie is still trying to recover from the public backlash of the last year so she decides to do a hard-hitting news interview. Meanwhile, as Cyrus continues to plot against Sally Langston, we learn how Fitz, Mellie and Cyrus became a team. Back at OPA, Huck continues to push Quinn away, but Quinn’s bloodlust could get her into some dangerous situations.
08 | 37

"Vermont is for Lovers, Too" November 21, 2013
Directed by: Ava DuVernay - Written by: Mark Wilding
Olivia and the team try to handle both uncovering the truth behind Operation Remington, while also managing a potential crisis with the Josie Marcus campaign. Meanwhile, Quinn falls further down the rabbit hole with Charlie, and Cyrus creates a plan to take down Sally, but doesn’t think of the possible harm he could inflict on himself.
09 | 38 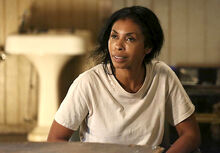 "YOLO" December 5, 2013
Directed by: Oliver Bokelberg - Written by: Chris Van Dusen
As the team gets closer to the truth, loyalties are tested and relationships are pushed to the limit. Meanwhile, Cyrus has to deal with his own Crisis and he realizes that he may have gone too far.
10 | 39

"A Door Marked Exit" December 12, 2013
Directed by: Tom Verica - Written by: Zahir McGhee
Now that the truth is out there, things will never be the same and everyone will have to face the consequences of their actions.
11 | 40 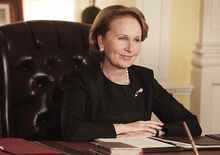 "We Do Not Touch the First Ladies" March 6, 2014
Directed by: Oliver Bokelberg - Written by: Heather Mitchell
Old feelings and jealousies arise at a Presidential event causing Fitz to face a harsh reality. Meanwhile, Quinn tries to prove herself to B613 and Leo Bergen sets up a meeting between Sally and an old friend.
13 | 42

"No Sun on the Horizon" March 27, 2014
Directed by: Randy Zisk - Written by: Matt Byrne
A well prepared Fitz gets thrown a curve ball during the first presidential debate, Olivia receives shocking news and is forced to make an extremely difficult decision, and the gladiators work with a powerful CEO accused of murder. Meanwhile, one dirty little secret could lead to deadly consequences.
14 | 43

"Kiss Kiss Bang Bang" March 20, 2014
Directed by: Paul McCrane - Written by: Mark Fish
Sally sets a meeting with the NRA which sends the White House into a tailspin. Olivia and Huck come to shocking realizations and a surprising person asks for help from Pope and Associates.
15 | 44

"Mama Said Knock You Out" March 27, 2014
Directed by: Tony Goldwyn - Written by: Zahir McGhee
The Grant children prepare for a live sit down television interview with Fitz and Mellie at the White House. Meanwhile, Adnan looks to Harrison for help and Rowan warns Olivia to stop investigating B613.
16 | 45

"The Fluffer" April 3, 2014
Directed by: Jeannot Szwarc - Written by: Chris Van Dusen & Raamla Mohamed
Abby steps in as Olivia’s proxy and takes on duties at the White House. Meanwhile, the team continues to investigate B613, and someone throws a wrench in Reston’s presidential campaign.
17 | 46 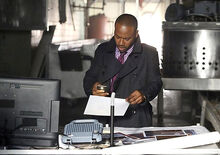 "Flesh and Blood" April 10, 2014
Directed by: Debbie Allen - Written by: Severiano Canales & Miguel Nolla
A security breach calls for an all hands on deck situation at OPA. Fitz’s re-election campaign becomes stalled and he considers going against Olivia’s advice. Meanwhile, Adnan and Maya continue to plot their next move.
18 | 47

"The Price of Free and Fair Elections" April 17, 2014
Directed by: Tom Verica - Written by: Shonda Rhimes & Mark Wilding
Election Day has arrived and nothing is off limits as the candidates try to capture votes. Meanwhile, Olivia tries to understand Maya’s motives and Charlie makes a very surprising move.
Trending pages