Andrew Nichols was an old friend of Fitz's and served as Fitz's Lieutenant Governor. He was Fitz's successor as governor and became the 48th Vice President of the United States on January 20th 2015 until being incapacitated and replaced by Susan Ross.

The character of Andrew Nichols was a supporting character who made his debut in the second half of the third season. He was portrayed by Jon Tenney.

Mellie confided in Andrew about her rape and the questionable paternity of her son Jerry. Late one night Andrew came across an unconscious Mellie and finds an empty bottle of Oxycodone. Andrew forces Mellie to vomit up the drugs and stayed up with her all night to make sure she was okay. When he questions her about the pills, she reveals the truth.

Andrew was elected Lieutenant Governor in 2006 and was elevated as Governor of California when Fitz was resigned in December 2008 when Fitz was elected President. Andrew served as Governor, finishing out the remainder of Fitz' term until January 3, 2011 when he was defeated in a bid for a full four-year term in 2010, losing to Democratic California State Attorney General Jerry Brown. He was recruited by Fitz to be his running mate for 2012 presidential election. Later, he tells Mellie he can't stop thinking about her and misses her. She reveals she feels the same way, but rejects any advancement of the relationship.

Olivia Pope & Associates's investigate the connection between Elizabeth North, Andrew and Dan Kubiak, she discovers they first met once before in Jeremy Winslow's office at the West Angola Commercial Organization and have been planning to start a war between West-Angola and the U.S., by setting up the bombing and kidnaps Olivia to force Fitz to declare a war.

Mellie tells Elizabeth that Andrew is out of control and he needs to be shut down. Elizabeth goes to the only person she knows that can take care of him, Huck. She tells him to kill him but he refuses because he says he "doesn't do that anymore", instead he injects Andrew in his back with causes him to have a stroke. The last time we see him is when Mellie goes to see him in Hospital.

Andrew Nichols was murdered by Olivia Pope, when Andrew refused to take the Ten million dollars that he demanded and threatened to kidnap Olivia again. Olivia killed Andrew by hitting him repeatedly over the head with a metal chair that was in the The Bunker; where Andrew was being kept.

Mellie and Andrew met while Mellie was First Lady of California and Andrew was Lieutenant Governor. While at the time their relationship never turned romanic, both admitted their interest in one another. Andrew saved Mellie from a suicide attempt and Mellie revealed the truth about the rape involving Big Jerry.

Fitz brings Andrew out to the White House to be his running mate. During a practice interview with Olivia, he reveals he never married because he had someone but let her go. It's revealed there was illegal drug use while Fitz was in the Governor's Mansion. Covering for Mellie's suicide attempt, Andrew claims he took the Oxycodone after he threw his back out. Later, Mellie and Andrew talk in front of Jackie Kennedy's portrait where they kiss. Andrew and Mellie were sent to Houston, TX to campaign for Fitz. While there, Mellie and Andrew had sex for the first time. Mellie and Andrew continued their relationship until Karen, Mellie's daughter, catches them in an intimate moment. An upset Karen reveals to Fitz what she saw. Fitz tells Olivia he needs Andrew and Mellie to stop sleeping together. Olivia tells Andrew to stop sleeping with Mellie or she will destroy him. Andrew declares to Olivia that he loves Mellie. After viewing a speech Mellie gives at a wounded female veterans event, he complies and ends his relationship with Mellie.

It is discovered by Huck and Quinn that Elizabeth North is having an affair with Andrew Nichols; while they are staking out Elizabeth North's Penthouse when Olivia Pope & Associates investigate the connection between Dan Kubiak, Andrew and Elizabeth. The both conspire with Dan Kubiak to make sure the war against West Angola happens by forcing by forcing President Fitz Grant's hand, Andrew does this by taking the one thing that Fitz cannot live without; Olivia. After Olivia Pope is kidnapped by Andrew and he refuses to sign a the letter of resignation, Cyrus forces Elizabeth to testify against Andrew or he will have her arrested and thrown into jail. 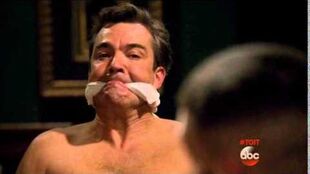 Andrew gets the Huck treatment. 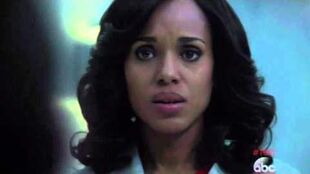 Scandal 5x17 Andrew "You're Just Another Cheap Slut...."
Add a photo to this gallery

Retrieved from "https://scandal.fandom.com/wiki/Andrew_Nichols?oldid=71815"
Community content is available under CC-BY-SA unless otherwise noted.