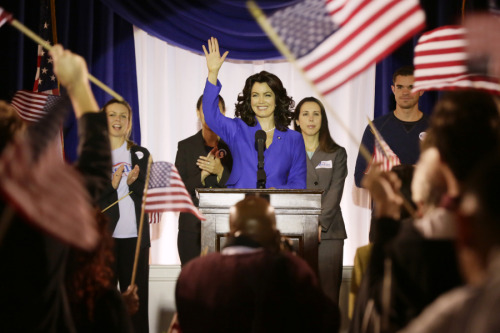 A Few Good Women is twenty-first episode of the fourth season of Scandal, and is the sixty-eighth episode overall.

Vice President Ross continues to defy the Grant administration when she hires Olivia Pope to defend a woman in the Navy. Meanwhile, Quinn and Huck must do what they do best to get answers about B613 and Mellie’s campaign for Senate continues to be a struggle.

Olivia leaves Jake alone in her bed. It’s nice to have a safe place to recover after enduring multiple stab wounds. Liv pops across the hall where Russell is being tortured by Quinn and Huck. She advises Russell to start talking about the meaning of Foxtail. Rowan eventually realizes something is wrong. The countdown to a confrontation with him begins. As for Russell, he tries to kill himself with a suicide pill. Unfortunately for him, he doesn’t get to die until he gives up the details of Foxtail. 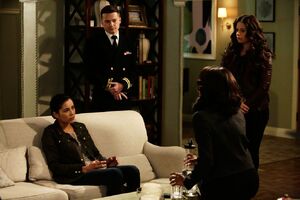 While on a tour of a military ship, Vice President Susan Ross notices something peculiar about the female communications officer, Ensign Amy Martin. She discovers that the naval officer was raped. Susan wants Fitz to do something about it. That’s not going to happen. So Susan Ross does the next logical thing. She needs someone else to fix this. She needs Olivia Pope. Ensign Martin’s rapist is John Hawley, a four-star admiral who is in tight with the president. The guy is pretty much untouchable. With no help from the White House on the horizon, Olivia goes public. This makes things a nightmare for Abby with the press corps, but that doesn’t mean she doesn’t want to help Liv with her case. A young JAG lawyer named Virgil Plunkett is assigned to the case. It’s his first rape case. Virgil’s ineptness is on full display during the deposition as Admiral Hawley claims he wasn’t even on the ship at the time of the rape. Ensign Martin reveals that she’s pregnant. She wants Olivia to get her off the ship so she can get an abortion. Actions are put in play to make this happen. The Navy continues to stonewall, so Olivia makes a call to the president. Even though someone was raped, there’s nothing Fitz can do about it. This is a military matter. Both he and Olivia agree that their jobs suck. A short time later, Ensign Martin has her abortion.

Mellie hasn’t been back to Springfield, Virginia since her son died. She needs to go there now to get the female vote. It’ll be hard to do this, as she doesn’t want to exploit her son’s death. Fitz offers to go the Springfield with her, but his wife knows she has to go it alone. Fitz gives her some thoughts on how Olivia would handle this. Mellie is advised to throw her husband under the bus. As for Olivia, she gets hold of the Navy’s security logs thanks to a request that came from their Commander-In-Chief. Olivia realizes that the admiral’s right-hand man, Captain Weaver, helped falsify Hawley’s alibi. The men switched security badges. A short time later, a naval security video is leaked online. It shows the Admiral getting violent with Ensign Martin. Hawley ultimately confesses to the rape. Once again, Abby has her hands full with the press. As for Mellie, she returns to Springfield where she publically states how she disagrees with how her husband handled the Navy rape case. This draws cheers from the crowd. Chants of “Mellie, Mellie” echo throughout the room. 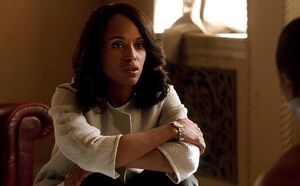 Jake tries to tell Olivia that Russell will never talk no matter how much they torture him. The guy is just like him. The only difference is that Jake is in love with her. Command would call that a defect. This is something Russell doesn’t have. Olivia tells Jake about the bathroom at her kidnapping location. It was the only place she felt safe. She felt it was the only place her father couldn’t get her. Jake asks for some alone time with Russell. He’s curious. He’s never met any of Rowan’s others. Neither has Russell. The two of them oddly bond over this. They both do a pretty good Rowan impression, too. Jake lets Russell know that he was caught because that’s what Rowan wanted to happen. This is how Papa Pope lets Olivia know that you can’t take Command. Russell asks Jake to keep Olivia safe. Then, after a final swig of beer, he’s ready to be tied up again.

While bidding adieu to Ensign Martin, Olivia and Quinn realize her lawyer may have been an imposter. The real Virgil Plunkett is dead. The person posing as him is over at Olivia’s apartment building. He knocks Huck unconscious with an injection and frees Russell. Elsewhere, Mellie is moving on from that cheering crowd to meet up with a big campaign donor. We learn that her Secret Service code name is Foxtail. Oh, and that big money donor just happens to Rowan.

Retrieved from "https://scandal.fandom.com/wiki/A_Few_Good_Women?oldid=68740"
Community content is available under CC-BY-SA unless otherwise noted.