A Door Marked Exit is the tenth episode and mid-season finale of the third season of Scandal, and is the thirty-ninth overall.

Now that the truth is out there, things will never be the same and everyone will have to face the consequences of their actions.

When we last saw Sally Langston, she was standing in her home with Daniel Douglas’s dead body on the floor before her. We jump back in time to see what led up to this tragic turn of events. Sally is furious at her husband for having sex with James. Daniel says he’s done. He’s leaving her. In a fit of rage, Sally stabs him in the back. Blood sprays onto her face. Sally takes a beat to process what she’s done. Then she calls Cyrus Beene about the sin she’s committed.

Thanks to Huck’s handy dental work, Quinn has a tracking device where her tooth used to be. She’s at B-613. She’s making a deal with Command while preparing to inject him with a lethal syringe. The deal is off once Maya’s location is discovered. Quinn misses her opportunity. She manages to remove the tracking device from her mouth. Huck loses her signal after she flushes it down the toilet. Quinn is gone. She and Charlie have been called for a job. It happens to be at the vice president’s place. It’s cleanup time!

Cyrus wants Sally to let him fix this mess. Daniel Douglas is set up in their bed. They are making it seem as though he had a heart attack. Cyrus needs a traumatized Sally to not let the examining doctor get too close to the body. That’s not going to be easy. Sally snaps out of her funk just before the physician undresses her dead husband. She knows what’s at stake. Cyrus convinces the doctor to forgo the formal examination since they all know it was a heart attack.

Rowan is on the move to track down Maya until his team is boxed in by agents working for the president. Fitz plans to detain him until Olivia’s mom is free. He wants to know why he was ordered to shoot down that plane if Maya was already in custody. He also reveals the intimate details of what he does with Olivia. This has Rowan going off on him for never having had to work for anything. He says Fitz isn’t in love with his daughter. He simply loves that Olivia is his way out. If he’s with her, he no longer has to be his father’s son. He calls the president a small, insignificant boy.

Mellie is ecstatic that Daniel Douglas is dead. Cyrus is less enthused as he engages in some early morning drinking. He spills the details about how the devil came to Sally. He knows that they are the devil in this particular situation. Mellie orders Cyrus to pull it together. That’s not going to be easy since James thinks he might be a murderer. He relays his concerns to US Attorney David Rosen, who isn’t interested in helping the man who almost destroyed his career and his reputation.

Olivia uses the Fitz Phone when she realizes the president is holding her father in the basement of the Pentagon. She joins the two of them. She knows there was a bomb on the plane. Eli made a judgment call to shoot it down to kill 329 people instead of the thousands that would have perished if it detonated over London. As it turns out, Maya lied. She tricked her husband into killing those passengers. Olivia orders Fitz to have her mom arrested the second she gets off the plane.

Rowan is set free to continue doing his B-613 thing. As for Maya, her plane never made it to Hong Kong. It was found in Mongolia. The entire crew has been murdered. There’s no sign of Maya. She’s in the wind. Olivia believes someone will likely pay for what went down with her father. She tries to warn Jake, but he’s only interested in kissing her. It’s a goodbye kiss. Jake says “I love you” before walking out the door.

Charlie tries to tell Quinn that a girl like her was never meant to be normal. He wants her to get some rest. Quinn lies down in bed next to him, but sneaks away while Charlie sleeps. She returns to the Pope & Associates offices. She makes a beeline to Huck, who is not sorry for what he did. This sends her back into Charlie’s arms. In other news, Cyrus lets James know that he’s still the love of his life. He’s hoping that he still loves him, too. James agrees to stay with Cyrus if he’s named White House Press Secretary. Deal!

Mellie lets Sally know that they are taking care of everything. She makes it clear that now is not the time to leave the family. Sally tries to tell Leo Bergen that she’s not going to run for president. She ends up spilling the news that she killed Daniel Douglas. Leo is furious that she called the White House for help. He says, “You kill someone… you call me.” Good to know. In other news, a woman who worked as a contractor for the NSA contacts David. She has a recording of the vice president’s call to Cyrus after killing her husband.

Olivia calls her father. She wants to know if he was trying to protect Olivia from who her mother was. He offers to talk to her about other things at Sunday dinner because she’s never going to get the answers she’s looking for from him. He heads back to work, but someone else is behind his desk. It’s Jake. He’s the new head of B-613. Fitz lets him know via phone that the two of them will make a heck of a team.

Finally, Maya calls Olivia. She won’t reveal her location. She only tells her daughter that she will see her real soon. We then see that Maya makes this call from just outside the White House. SHOCK!!!

For a full list of cast/character credits in order as they appeared click here: A Door Marked Exit Credits

These pictures are courtesy of the actors and production team's Twitter posts.

Columbus Short in his PJ's with the ladies of the Scandal production crew.

Joe Morton with the men of the Scandal crew, including Lead Director Tom Verica. 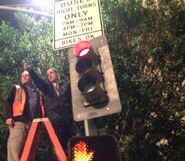 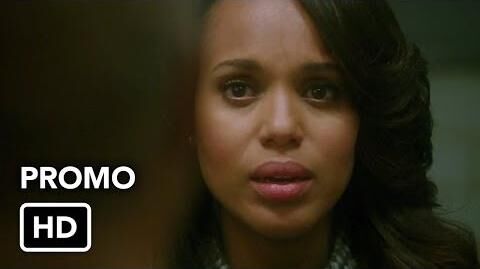 Retrieved from "https://scandal.fandom.com/wiki/A_Door_Marked_Exit?oldid=71164"
Community content is available under CC-BY-SA unless otherwise noted.