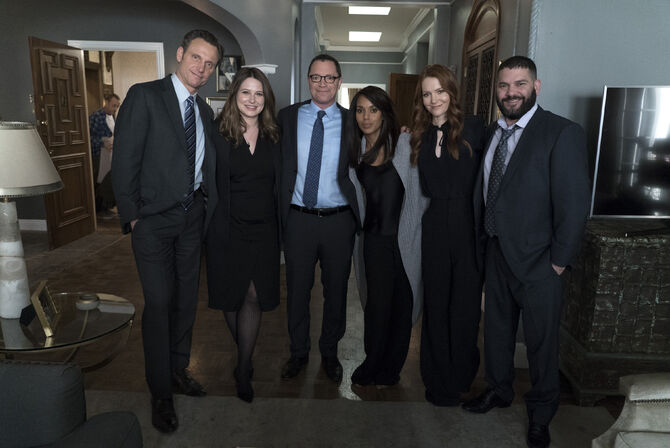 After seven seasons and 124 episodes, Scandal will bid farewell on Thursday with what the cast describes as a satisfying series finale. But the stars of the long-running ABC political fixer drama said their goodbyes in grand fashion back in March, as they shot into the wee morning hours on what’s become known as a Fraturday. - Entertainment Weekly

“For our very final shot, we had every single cast member come back to set, except for Scott Foley, who was shooting in Europe and called in on FaceTime,” Kerry Washington tells EW. “Even my parents were there until three in the morning. It was really beautiful and special; it was poignant.”

“The final moment, as it was scripted, was pretty momentous and evocative and unforgettable. The imagery of it leaves you with a lot of questions; I think it can be interpreted in so many ways.”

“When we ask her, Shonda said she had intended to end the show at the next inauguration, Her idea of the show was Fitz’s [Tony Goldwyn] tenure as president, but then the world changed, and she thought she had more things to say. So every moment this year, we’ve been really aware it’s our last.”

“I tend to keep it pretty buttoned up and I would say, ‘We can’t keep having this moment, we can’t celebrate every last,' that was a very special moment that I’ll always remember.”

“It wasn’t supposed to be emotional, but we all couldn’t stop crying,”

Retrieved from "https://scandal.fandom.com/wiki/2018_Scandal%27s_Final_Day_Filming_by_EW?oldid=70552"
Community content is available under CC-BY-SA unless otherwise noted.